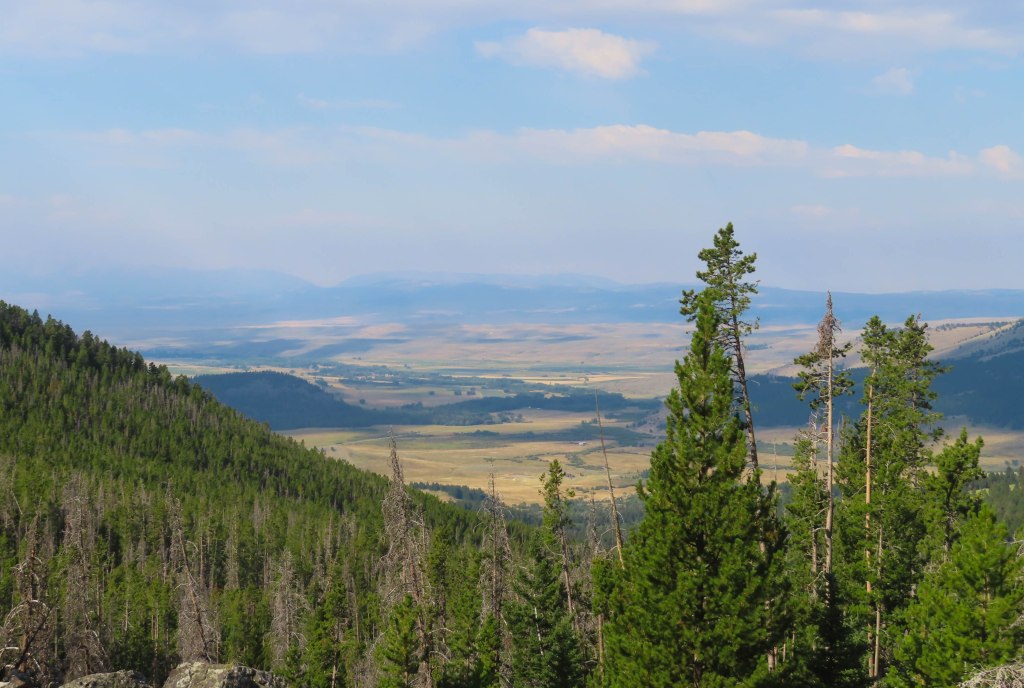 September usually brings cooler temps, rain or snow. Not this year so far. It’s hot–in the nineties, not a drop of moisture or lower temps in sight.

In mid June we had that major windstorm which took out so many of our aspen trees. We’ve been spending a bit of time each morning cleaning up the mess. The Cowboy operates the mini excavator loading the bucket of the skidsteer I’m operating with logs and limbs which I then haul to the burn pile. Our burn pile is getting too big and we’ve had to start another one. It may take us a while to clean up the mess.

On Wednesday we were in Billings again for another medical appointment and grocery shopping. Back home the Cowboy busied himself getting our rig ready for an unexpected ATV trip on Thursday. The truck is still naked–no box or flatbed so we had to take the jeep and a little trailer the Cowboy made several years ago.

The ATV gang met in Big Timber at the Fort early Thursday morning trying to beat the traffic at a one lane bridge over near Livingston, heading up into the Crazy Mountains. Not long ago we rode trails in this same area with Sarge and Sarah but this gang has ridden in this area many times and knew of different trails–even a loop trail which we all like!

Four couples, six rigs and three dogs had a great day. It was much cooler up on the mountain and although the skies were a touch smokey, the views were still awesome. After riding all day we headed out stopping at the The Bank Bar (housed in the old bank building) in Wilsall for dinner. The food was good and the service very good. By the time we were on the interstate heading toward Big Timber it was getting late and by the time we started up the Boulder it was dark. And the deer and elk were determined to commit suicide! We dodged about five or six deer and two elk before pulling into our driveway with a sigh of relief. 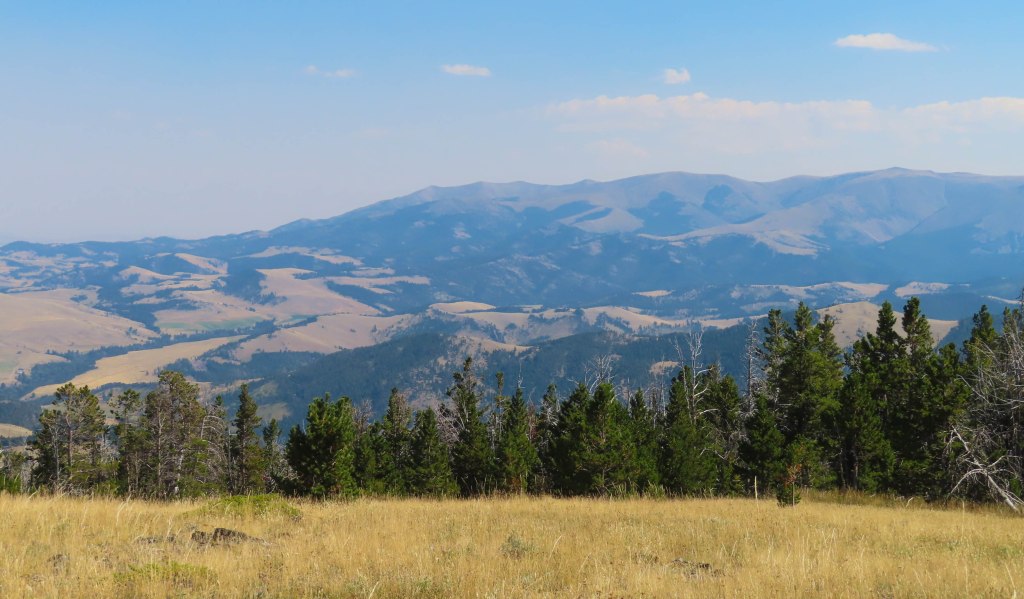 We have been so fortunate this summer to have had no smoke–our luck ran out yesterday. Today the mountains are either non visible or a faint shadow. And it stinks. The Cowboy said the smoke map shows our smoke is coming from British Columbia.

And today the Cowboy finally felt better and made great progress on the flatbed–it’s on the truck!! Not finished but at least the flatbed is bolted to the truck frame. I worked in the RV a bit before lunch–cleaning and rearranging. This afternoon I retreated to the basement and quilted–the stitch in the ditch with clear thread is finished and so is the border. Now to fill around all the wool pieces. 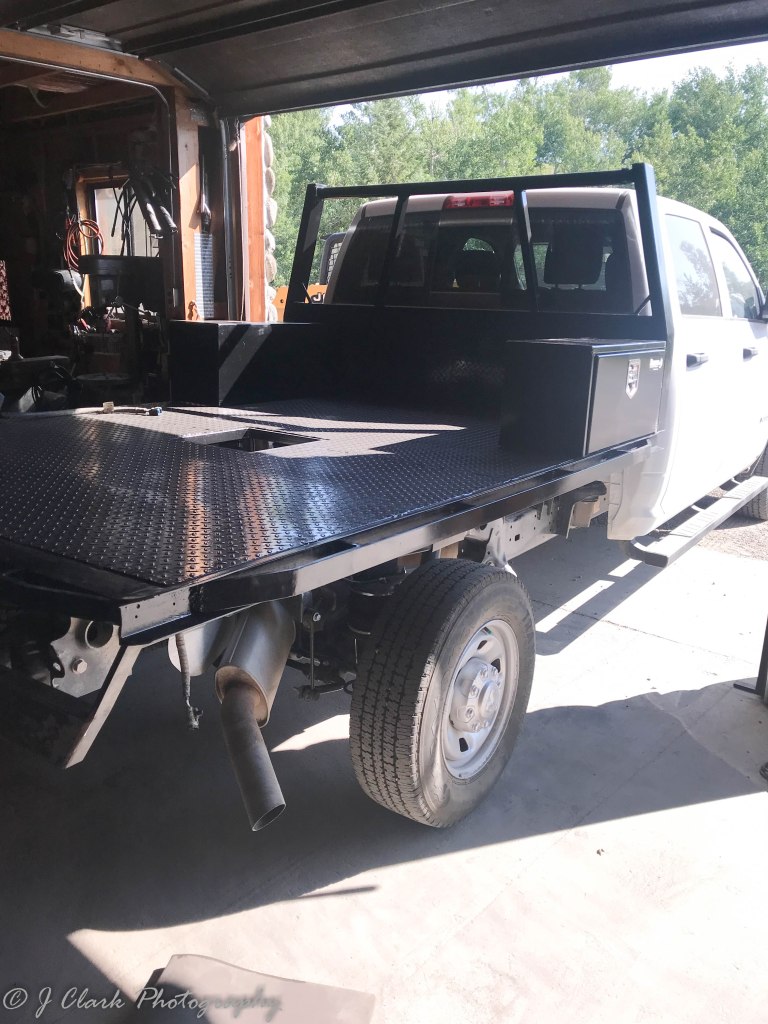 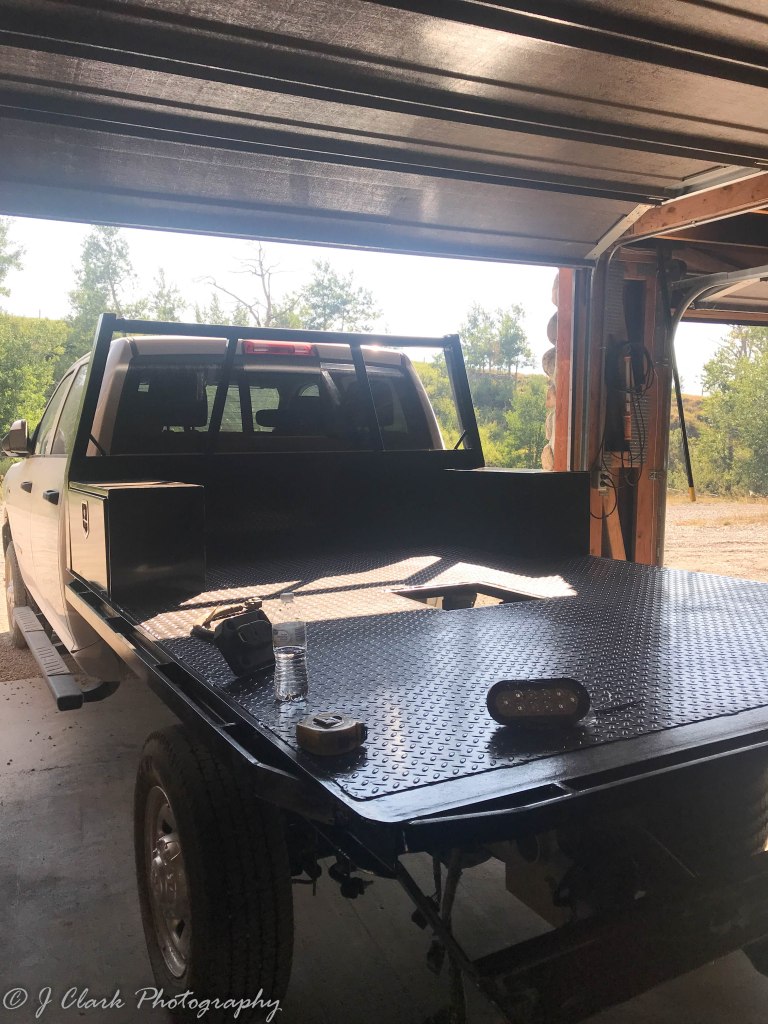 Emmi sleeps a lot–when she does go outside in this heat it’s not long before she is ready to go back inside. We take our long walk in the morning, usually before the sun rises above the mountains when it’s cooler and we sometimes take a shorter walk in the evening after the sun has set. I have rattlesnake nervousness–we had one in our backyard and now everywhere I go I hear that noise! Stepped on a dead weed the other day and about jumped out of my skin–the dry weed made a rattlesnake like sound. We are over run with grasshoppers and sometimes those nasty things make a noise which makes me jump!

Life is good even if it is miserably hot!!!

14 thoughts on “A Little Fun, A Little Work”