Last Sunday evening we dined at Dan and Louanne’s. Dan roasted a pre-seasoned tri tip he had purchased at Costco–it was simply amazing!! All the food was so good! As I’ve said before, we do dine well in this community!

It’s been a week of this and that so I thought I would share photos of some completed projects: 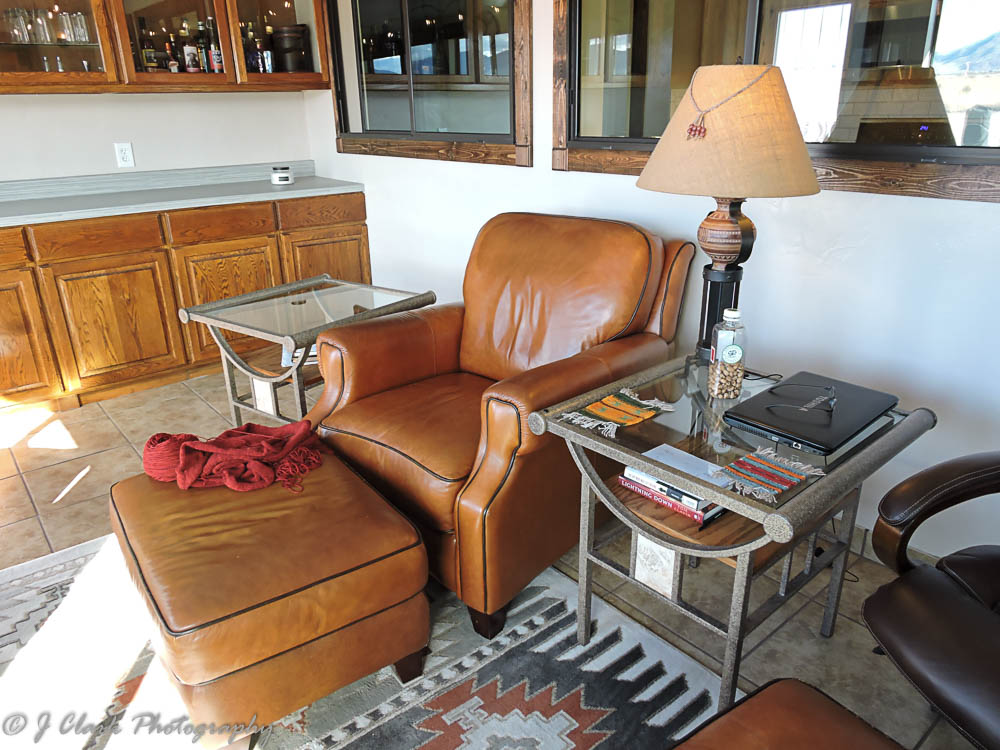 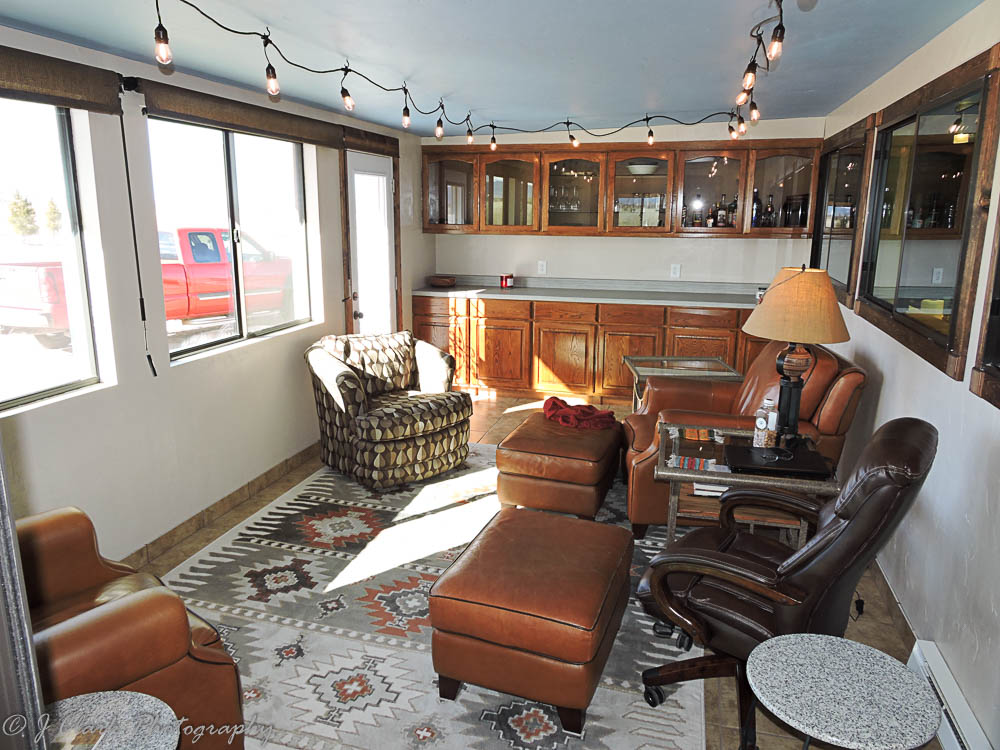 And the porch–really it’s an enclosed room with large windows and a windowed door but it’s a great place to sit in the afternoon with the sun turning everything warm and golden. The leather chairs and ottomans are the ones we purchased from the Tucson Craigslist. The other chair and the tables came from a local garage sale. The office chair is the Cowboy’s favorite computer chair. The ceiling is painted blue–a contractor friend in Montana paints the ceiling of porches blue to keep out the evil spirits. I Googled “painting a porch ceiling blue” and found these reasons–

Tuesday we had a bit of rain making the outside world smell so clean and fresh. 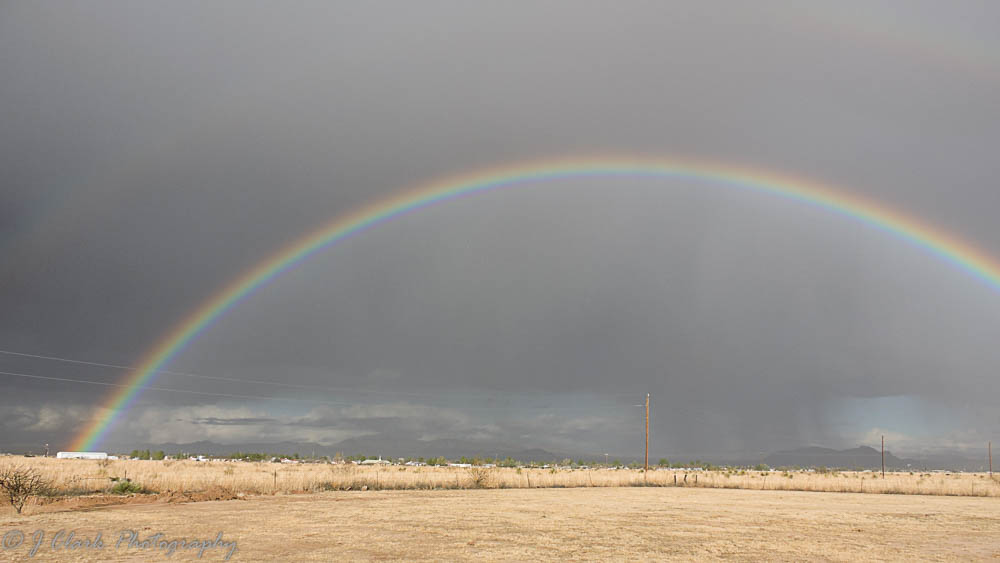 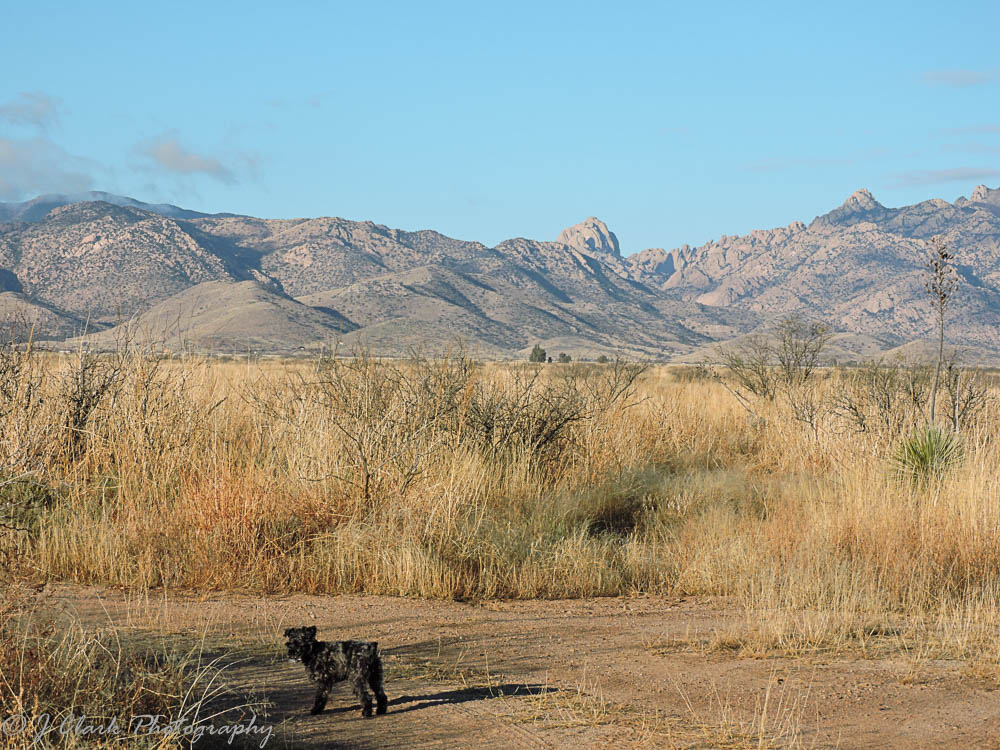 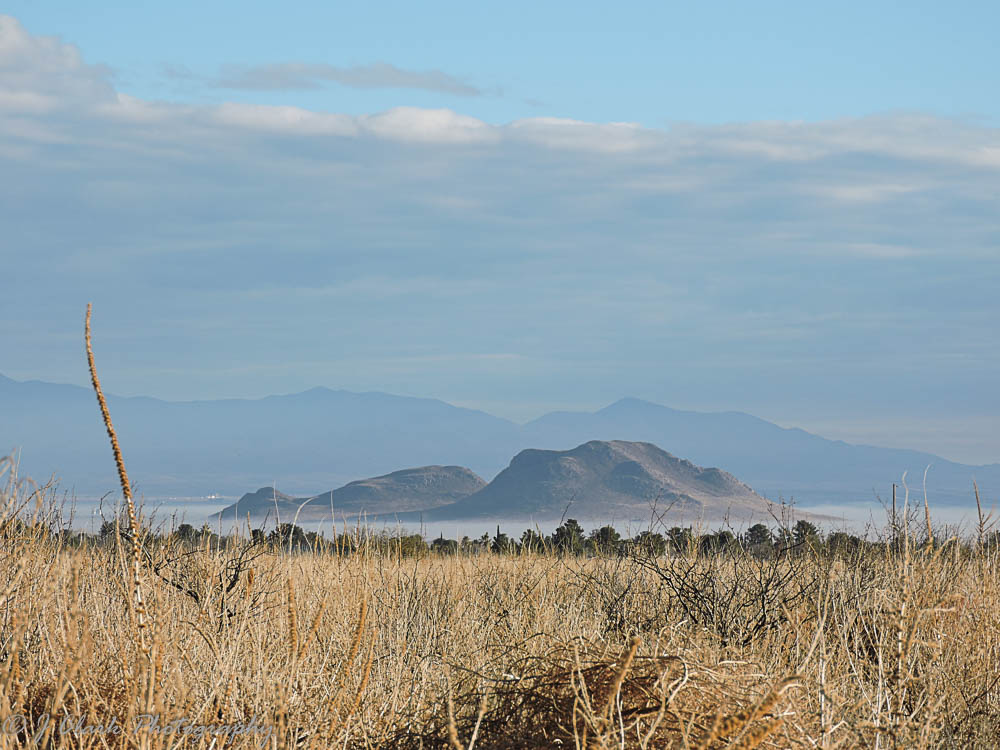 The fog left behind from the rain made the hills look as if they were islands in the sea. 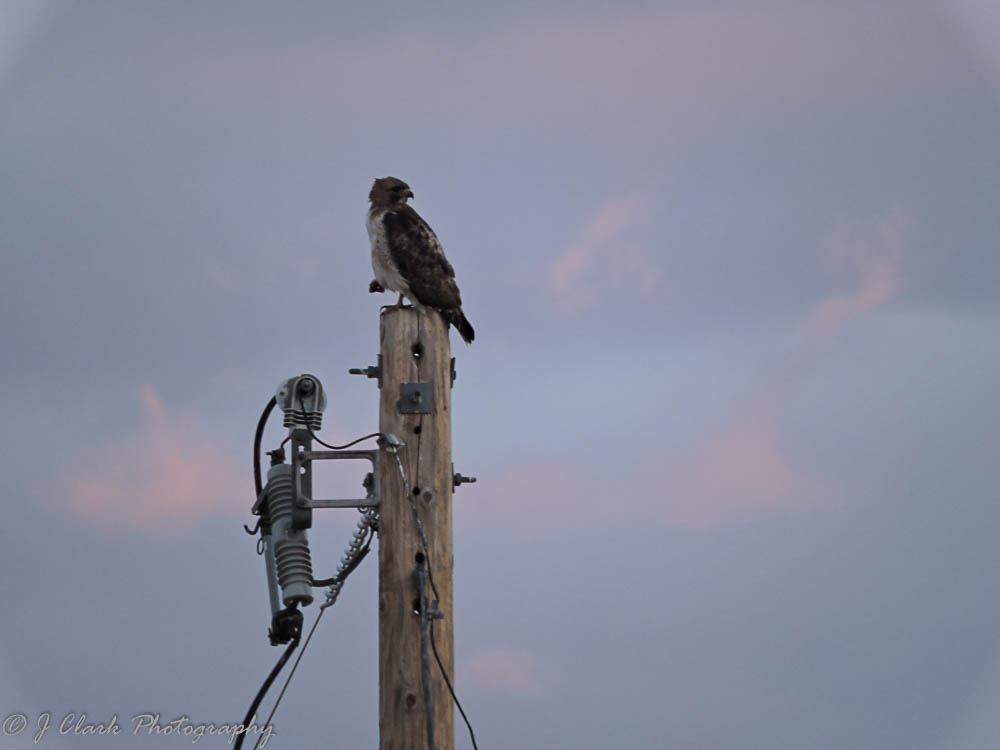 This hawk was facing the other way when I first saw him then the resident owls at our neighbor’s hooted. His head swiveled in the direction of the “hoots” and I could just hear him thinking–maybe I should depart this post! 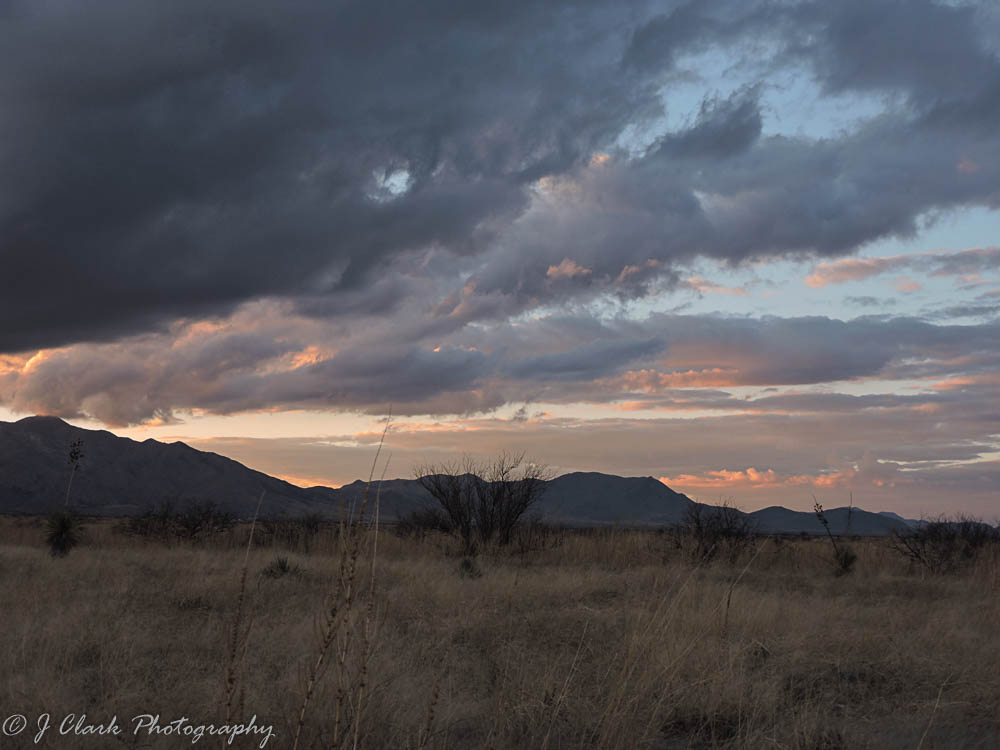 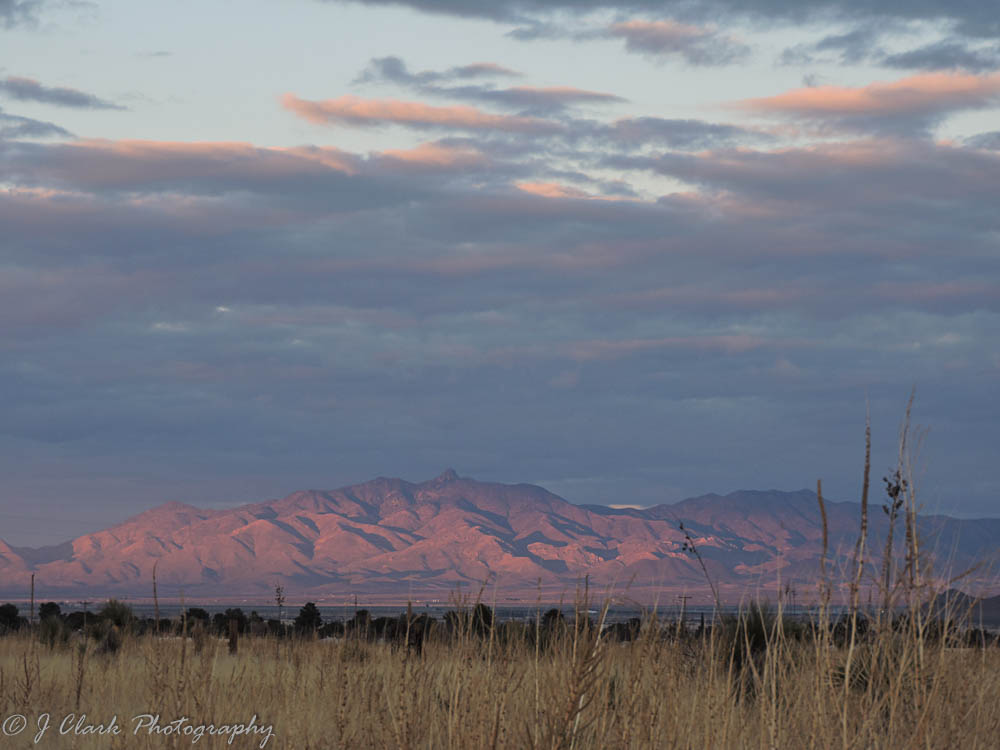 Emmi has had a couple spa days–she gets so agitated when I’m clipping her hair that I try to complete the new haircut in a couple days instead of making her stand for so long. She is all nice and spiffy now.

The laundry remodel continues–the new drywall is in the ceiling and the cement board has been laid on one side of the room.

Friday we made a trip to Sierra Vista to purchase a couple items we found on Craigslist–Leki hiking poles and a Pfaff Tiptronic sewing machine. I had a pair of Leki poles and accidently left one in a motorhome we sold. Plus having a set in both homes was my goal–success, at a great price. I have a Pfaff Tiptronic in Montana and it’s a workhorse sewing machine–even hems denim. The Pfaff sewing machine I have here we purchased on Craigslist in Montana several years ago. It’s not one of Pfaff’s better machine and when the Cowboy saw the Tiptronic pop up on Craigslist off we went. Groceries plus lunch and we were on our way back home.

It rained again overnight with not much accumulation. Snow on the mountains. Sunday afternoon I joined the ladies at Linda’s to play Rummikub–a game that has evidently been around a long time. It’s fun and we have a good time.

It’s been a good week–I think!

21 thoughts on “A This And That Kind Of Week”