Tuesday night saw us in a RV park in Billings, MT–on purpose. Mother Nature is acting ugly in October after our awesome Indian summer! After 10 inches of snow then torrential rain on Monday night which caused the snow on our metal roof to slide with resulting big thumps scaring all three of us half to death–we now were expecting daytime highs of EIGHT degrees and night time lows in the minus numbers plus more snow! This is October Mother Nature–behave yourself!!! 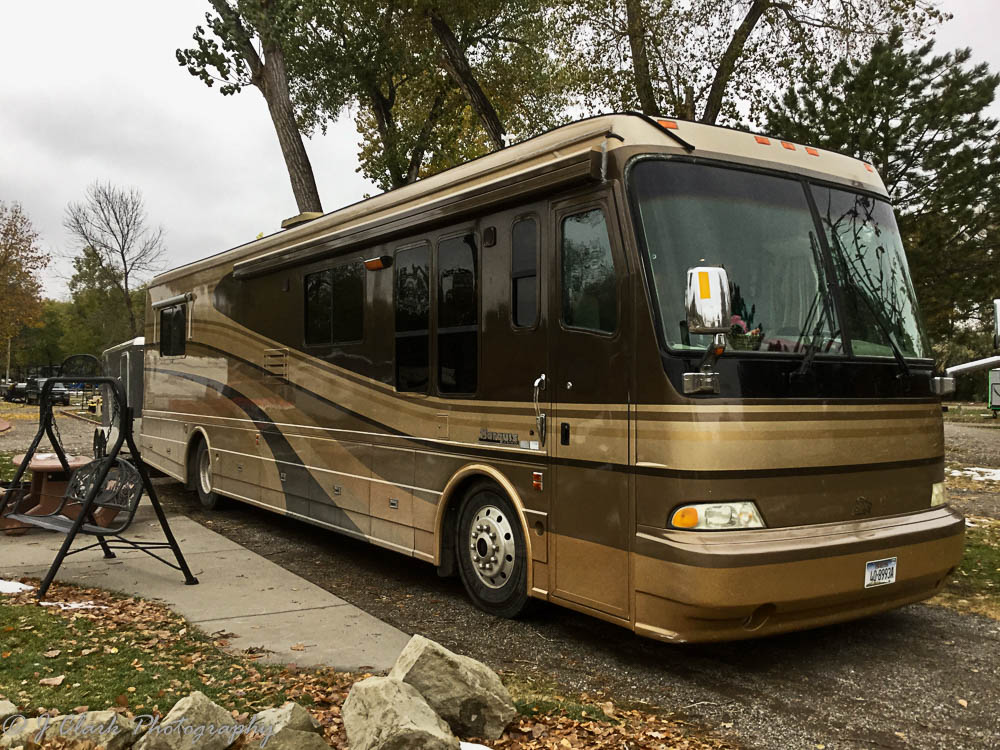 Time to depart. Except, I had my last knee injection scheduled for Thursday along with a haircut. Phone calls went out on Monday and I was able to reschedule the knee thing for Wednesday. Haircut was a different matter but I got lucky–my hairdresser is super, super busy–schedule your next appointment when you leave or you won’t get the next appointment. I called bright and early Tuesday morning and hit the jackpot–she had a cancellation for Tuesday afternoon at 2:15.

Having to be in Billings (2 hours away) by 2:15 stressed our capabilities to the max! I was dumping stuff on the bed thinking to sort it out once we were settled for the night. Closing up the house, empty the dishwasher, get rid of the garbage. We were heading down the driveway by 11:45am–exhausted! My Cowboy drove that motorhome through multiple roundabouts in Billings like a pro and delivered me 15 minutes early for my hair appointment.

We are spending the night in our only second ever KOA campground. Winter rates in Billings are much more tolerable than summer–$49/night. In summer it is $80+/night. Lots of people living in RVs this time of year–do they know what winter is like in Montana???

My last knee injection was at 10:00am today and we were off. To beat this winter storm we are traveling the interstate this time. We will be just ahead of the storm hopefully and by Thursday afternoon we will be in southern Colorado with daytime highs in the low 70’s and temps at night in the upper 20’s. We usually boondook but at these temps we are finding RV parks. Tonight we are in Wheatland, WY at Mountain View–a parking lot with hookups and great staff!

Casper, Wyoming is notorious for wind, major wind and today was no exception. The Cowboy handled this old coach with ease and we traveled with no issues Larry! Our phone rang Tuesday as we were arriving in Billings and it was Larry–the guy who sold us this coach asking if that was us he just passed in Billings–yep–can’t get away with anything in Montana!

I promise to do better with the photos in the next blog.

14 thoughts on “The Wheels Are Rolling”