And they said it wouldn’t last! Michael and I celebrated our 25th wedding anniversary today, Wednesday. We were 38 and 48 when we met and were married shortly thereafter when we were 39 and 49. Where have the years gone, it truly does seem like yesterday when I walked into Walkers Grill in Billings, MT to meet a guy I’d never seen before.  I often say I wish we had met when we were younger but I will take the years we’ve had. He loves me to the moon and back and I love him to the moon and back. No, it hasn’t always been a bed of roses but we’ve had way more good times/days/years than bad. 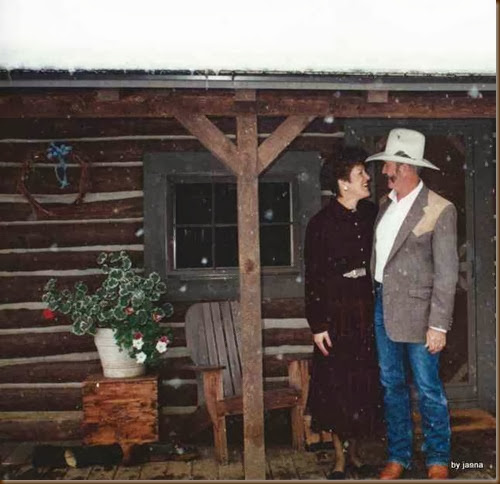 Our wedding day in October with a snowstorm at the home of dear friends, Jill and Terry.  Here’s a link to the story of how the Cowboy and I met.

And no, I didn’t ride the motorcycle wearing flip flops, this was a photo taken by the organizers of a rally we were attending.

When we first met I was Director of Nursing at the hospital in Powell, WY and the Cowboy was managing a ranch near Big Timber. He also owned the ranch up the Boulder.  We were taking a Sunday drive discussing where we would live, Wyoming or Montana.  As there was no hospital in Big Timber (at least not with an operating room–my specialty) I didn’t see how it would be possible for me to live in Big Timber.  The Cowboy said, “well, you wouldn’t have to work.”  I was driving and that statement about sent me careening off the road. I had never not worked!

So, I moved to Big Timber and didn’t work except on the ranch helping the Cowboy.  I learned what constitutes a calf coming out the right direction and what would tell me if it was coming out the wrong way–get the Cowboy–and hurry!  When I saw my new husband walking the top rung of the wooden fence I learned heifers are sometimes cranky after birthing their first calf.  I learned how to drive an 8000 pound hay swather with a 12 foot cutting bar.  And I even baled hay one summer. The Cowboy learned to live with a bossy oldest child–he’s an only child–and he learned how important my family is to me.

He learned that I wouldn’t eat anything I had to feed every day with a bottle and that I didn’t particularly like cow poop on my boots! My life helping on the ranch only lasted about nine months and I became very bored–the owners of the ranch kept the Cowboy busy but not me.  I went to work as a consultant for the Kimberly-Clark Corporation supporting their healthcare product sales representatives all across the country.  I traveled usually twice per month and in the “honeymoon” phase the Cowboy would take me to the airport (100 miles) and then come back and get me at the end of the week. This job lasted 12 years and I learned to take myself to the airport :).  At the age of 62 the Cowboy retired.  I worked a couple more years and retired at the age of 54.  We have been incredibly blessed in our life together and I wouldn’t trade places with anyone else.

Today we left Emmi at home and traveled to Tucson for lunch at the highly rated El Charro–a Mexican food restaurant operated by the same family since 1922 in downtown Tucson. We made a Costco run and stopped at Petsmart buying the Emmi girl a new bed and a new toy which she absolutely loves!  Life is good.