I can’t remember when we’ve had such a glorious summer and as Bayfield Bunch Al said, it’s flown by!  We’ve had no 100 degree days and only a couple 90 degree days. Our long range forecast for the end of August shows temps in the 70’s and even some in the 60’s.  I will take it!

Thursday morning Emmi and I pulled out of Shannen and Mark’s at the crack of dawn after watching their dog and a buck deer play with each other out in the field.  The dog is supposed to keep the deer from getting into the stacks of hay–I think they might need to come up with another plan! 🙂 Once on the highway we dodged a couple deer ourselves and made it to the dentist office with only minutes to spare.

The root canal is finally finished.  The endodontist told me, “don’t be in a hurry to get a new crown, let’s see if this works.”  Didn’t instill too much confidence but I can hope!  It was a tough appointment.  I’m not a dentist wimp by any stretch of the imagination.  Now my sister and my brother–that’s another story–at least when they were young! 🙂 🙂 I wore braces on my teeth for three years as a teenager. I had a spacer bar in the top of my mouth which had to be expanded each night with the turn of a little key–my teeth hurt all the time!  I drank a lot of milkshakes and wouldn’t drink one as an adult for a long time–couldn’t stand the taste or texture.  I’ve had my share of crowns and fillings.  My Dad had horrible teeth and wore dentures as far back as I can remember.  Mom doesn’t have the strongest of teeth either so I came by it honestly.

But back to the “I’m not a dentist wimp…..”  When the dentist was injecting me this time he hit the actual nerve sending a major electric feeling shock out to my lip.  OUCH!! He also did some major pushing and pulling so my jaw was sore.  I sure hope this root canal works!

After the dentist Emmi and I headed to Walmart for our grocery order then pointed the truck toward home.  It’s usually me doing the traveling leaving Emmi and the Cowboy at home.  When we got home Emmi wandered all around looking for her other people–she was a sad pooch!  I unloaded the truck camper and collapsed!

Friday I puttered a bit, quilted a bit and was very glad to see the Cowboy pulling into the driveway late afternoon.  He is so pleased with the way the motorhome performed pulling the cargo trailer with CanAm inside.  He had a great time–he was hoarse from talking and laughing so much–it was a good trip! 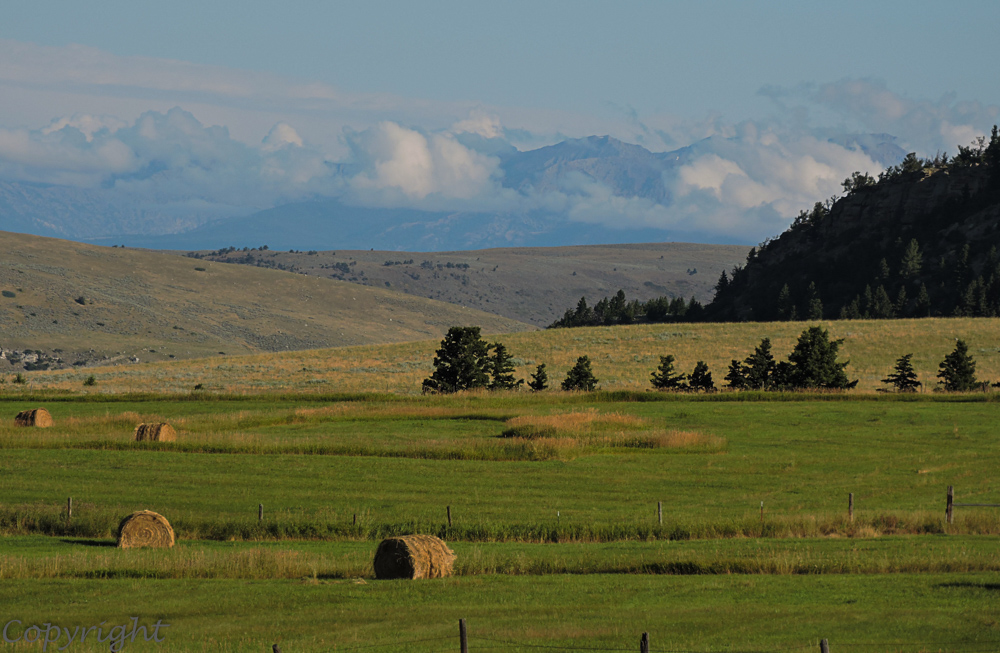 Clouds rolling over the Crazy Mountains.

Saturday the Cowboy installed on the motorhome the new air bag the company sent us after the original one had a leak. In the late afternoon we went to a party.  And for some strange reason I left my camera at home.  One of the area ranches was celebrating their 100th anniversary.  It was a beautiful setting right beside the Boulder River. Under a big white tent, were beautifully decorated heavy duty, gorgeous tables made from former bridge planks–with benches to match.  Dave, the owner of the ranch made the tables.  The food was marvelous–Dave, Peggy and friends created all the food.  There was a great band from Red Lodge, MT–Band Montana. It was a fun party!!

Usually we each do our own breakfasts.  I eat yogurt with fruit and granola, the Cowboy eats cereal or makes himself an omelet.  On Sunday I frequently make bacon and eggs.  We then will have a later than usual lunch–that’s what we did today because I’ve been quilting!  I finished the little “It’s A Dog’s Life” quilt and now just have to hand stitch the binding.

And here are more photos of our adorable great grandchildren. 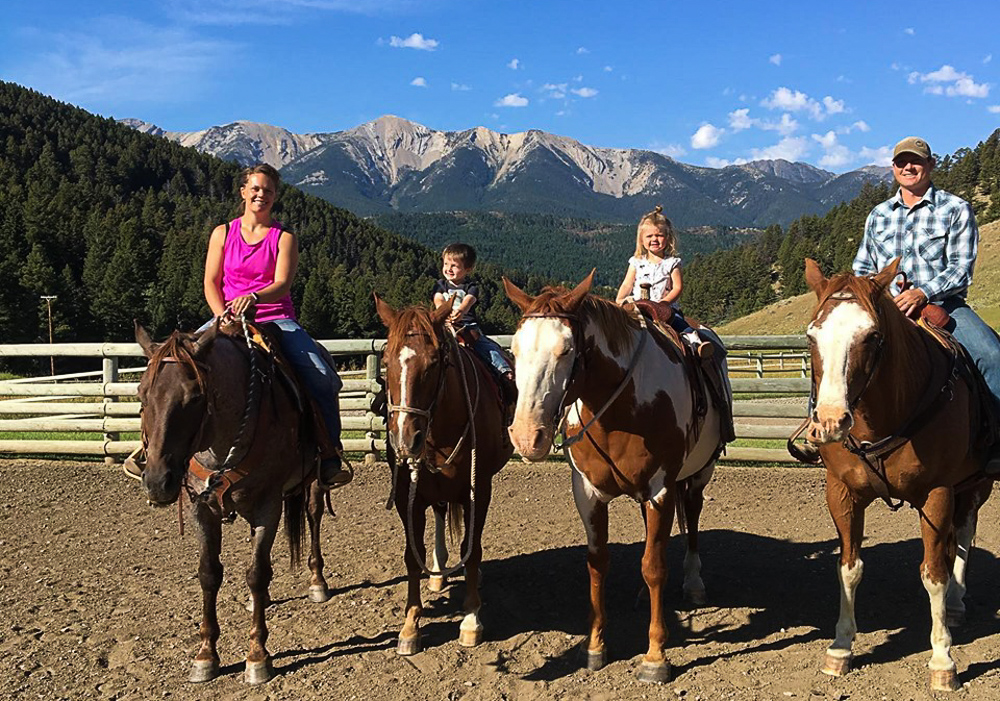 Grandpa Lonn and the wild bunch! 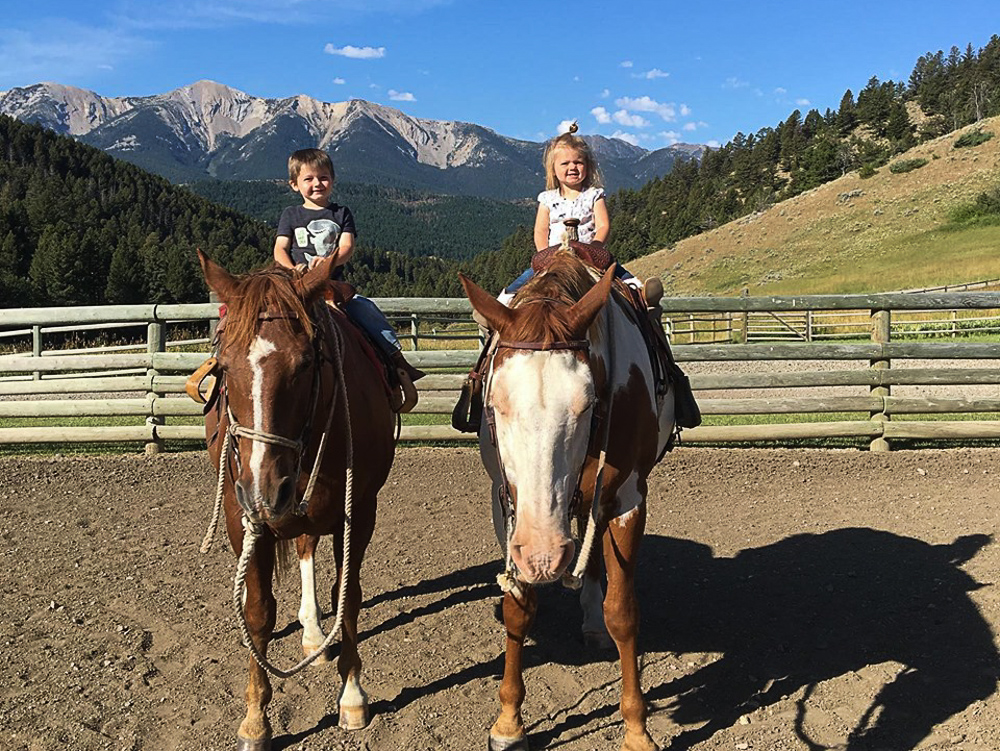 Hey, who said my babies could ride those big ole horses????

These two kids are growing up in one of the most beautiful places on earth just like their Mom and Aunt Laci did.

19 thoughts on “What A Fabulous Summer We’ve Had”