And it was not to Billings–it was a trip for fun.  Friends Boo and Terry from up the Boulder also have a place in central Montana.  They are in the process of developing the property for bird hunting.  It’s Missouri Breaks country and beautiful–totally different from “up the Boulder” but stunning country in its own way.  Extremely rugged, home to some fabulous dinosaur finds, missile silos and slimy roads when it rains.  Boo called asking us to come visit and off we went with ATV in tow. 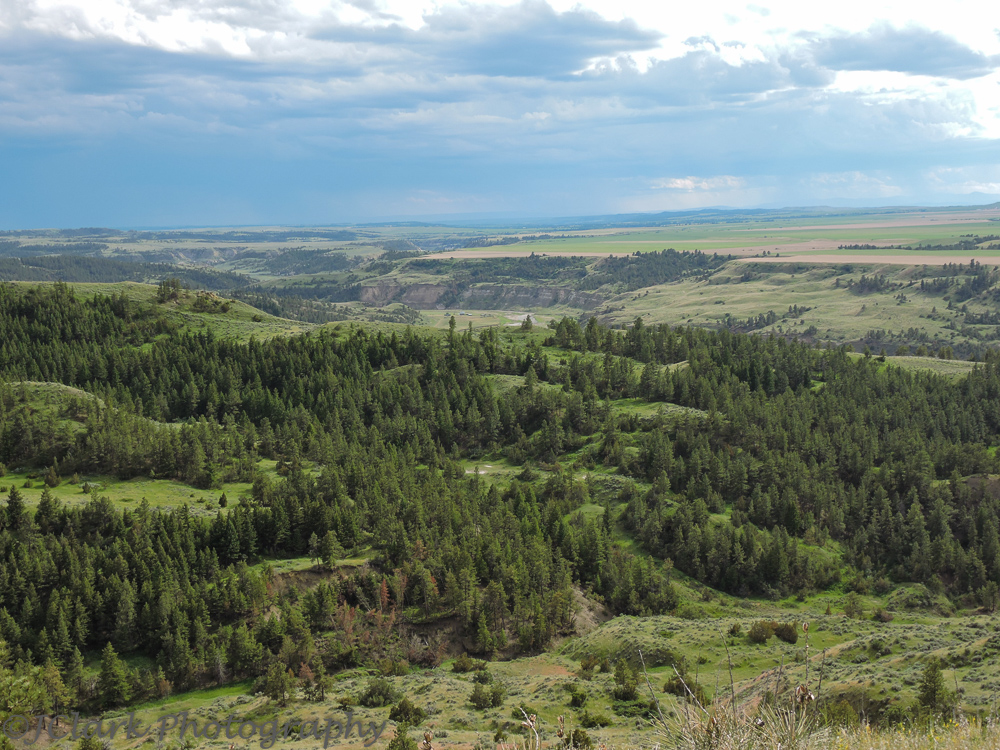 It pays to live on a road leading to one of the numerous missile silos–the roads are very well maintained but those signs are a touch scary!  Thursday evening before dinner we took a truck tour and then enjoyed a fabulous dinner of steaks on the grill, corn on the cob and salad.  Boo and Terry have a lab named Rio and of course the little princess Emmi was not thrilled having to share the people attention.

Friday morning we loaded into the ATVs and went for a tour of their property. 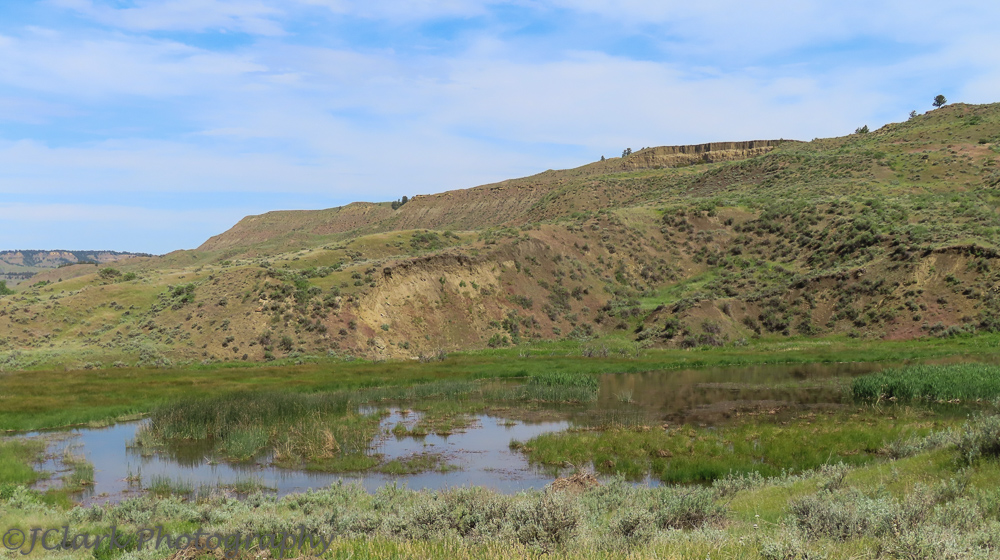 Checking out the planted food plots.  Terry and Boo are cultivating both food plots and cover crop plots hoping to attract birds.  The ranch also has multiple hedge rows which provide cover for the birds.

Friday evening we headed into town for dinner.  A wealthy benefactor has attempted to revitalize the tiny Montana town of Winifred.  One of the new businesses–a fabulous restaurant/hotel/bowling alley.  Beautiful restaurant and fabulous food.  Before dinner we visited the museum and saw one of the largest collections of Tonka Toys in the world.  Bones from a horned dinosaur were found on private property near Winifred and a replica cast of the head is on display in the museum.   The actual skull and several other bones of the dinosaur nicknamed Judith are on display at the Canadian Museum of Nature in Ottowa.  After touring the museum and picking the brain of the curator we headed for the Missouri River and the site of the McCelland–Stafford ferry.  The ice flows on the Missouri river destroyed the ferry cables this winter thus the ferry is not operating and I could find no information as to when operations might begin again if at all. 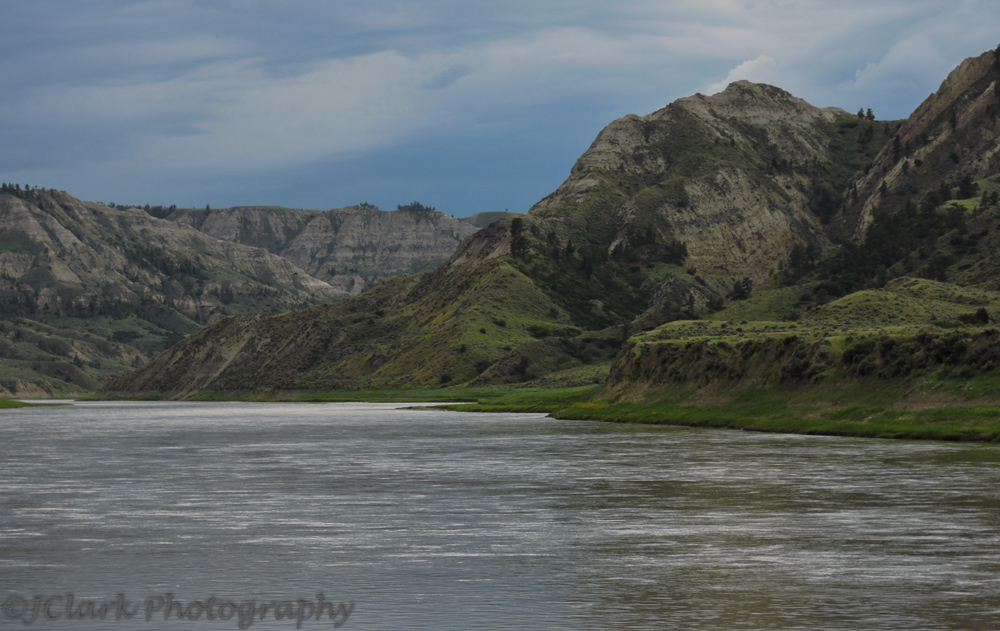 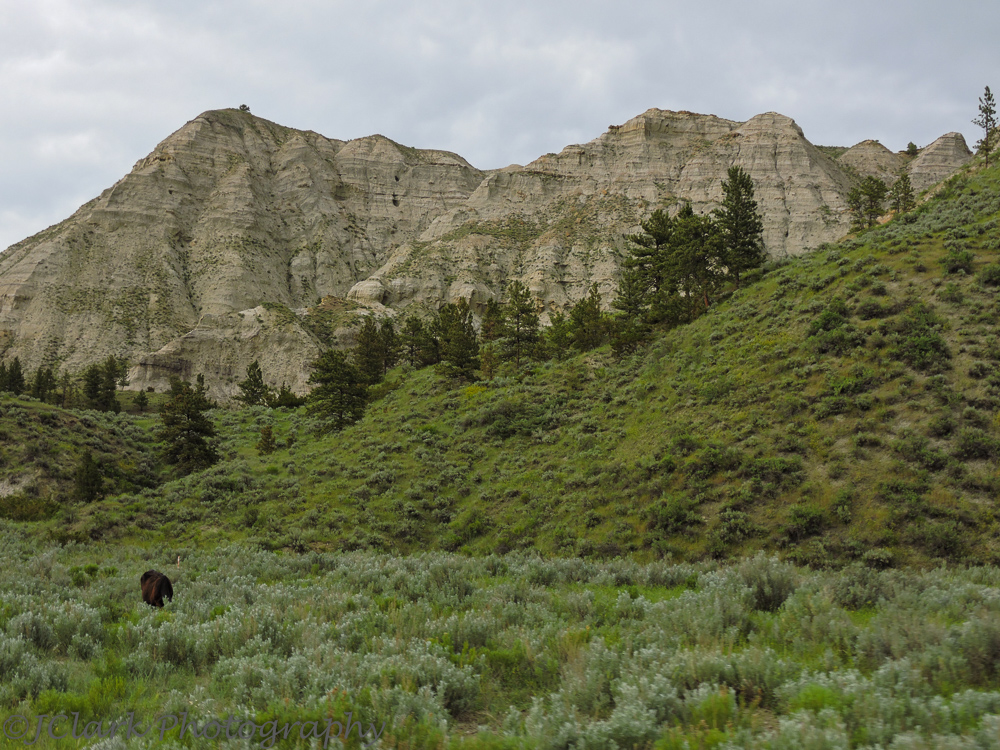 On the way back to Winifred for dinner the skies opened and it poured rain.  After dinner to headed back out to Boo and Terry’s–their road is mostly well maintained by the county but in spots could use some more gravel.  When it rains in this country the roads can become impassable–slimy, slick, tire size increasing roads.  Terry did a great job of navigating the slick spots and we made it home where Rio was patiently waiting for us.

Saturday morning the guys started working on a garage project and mid morning we enjoyed a late breakfast before packing the truck and heading back to our neck of the woods.  It was a great little getaway and we so appreciate Boo and Terry’s invitation and hospitality!

8 thoughts on “We Take A Trip”