Tuesday evening the wind started blowing and continued to howl all night, not common–the wind usually stops when the sun goes down.  The wind continued to literally howl all day Wednesday and into the evening.  The dust is awful as you can see in this photo of the Willcox Playa.  Our temps on Monday and Tuesday were close to 90 degrees.  Wednesday the high was 65!!

The Willcox Playa is a large endorheic dry lake or sink (playa) adjacent to Willcox, Arizona in Cochise County, in the southeast corner of the state. It is part of the Sonoran Desert ecoregion and is the remnant of a Pleistocene era pluvial Lake Cochise. Portions of the dry lake bed have been used as a bombing range by the US military. It was designated a National Natural Landmark in 1966 for its fossil pollen captured underground, the thousands of sandhill cranes that roost in the area and the largest diversity of tiger beetles in the United States. Wikipedia.

We went to Willcox Wednesday and drove through what appeared to be heavy fog but in Arizona is dust!  I needed a haircut in the worst way and we both had lists.  The Cowboy completes his list while I get the haircut.  Then we have lunch–today we ate at the Double S Steakhouse and it was fabulous!  I had a salmon burger with a dill/mayo sauce, grilled tomatoes and cucumbers–it was divine.  Can you guess what the Cowboy ate??  A few groceries and we braved the wind to head home to Emmi.

Once again my problem with lost photos was not a Lightroom issue but user error–for some reason my Nikon P600 had lost its date/time setting so my photos were not being saved as “date taken.”  Lightroom is taxing my older brain but it’s also good for my brain–there are 76 videos in the disc Sue loaned me–if I keep watching the same ones over and over, it’s going to take a while to view all 76! 🙂 🙂

Thursday we had more wind, not as bad as on Wednesday but still windy plus it was dang chilly!  Our friends Angie and Ralph who are full time RVers and currently staying in Tombstone came for lunch today.  I provided the ribs and potatoes, Angie brought coleslaw, her world famous jalapeno cornbread and a to die for chocolate cake.  It’s always good to see those two who we originally met while participating in Cowboy Action Shooting back in 2003.

The Cowboy has hung more drywall–he had to find an inside job–way too windy to set steel posts. Yesterday afternoon the Cowboy added to his tool and storage collection.  When at the post office he noticed a “for sale” sign on the bulletin board.  Various woodworking tools and rolling toolboxes were advertised.  So, the Cowboy went shopping coming home with a sliding compound miter saw and table, a planer with table, and two large rolling toolboxes–he is a pleased carpenter! 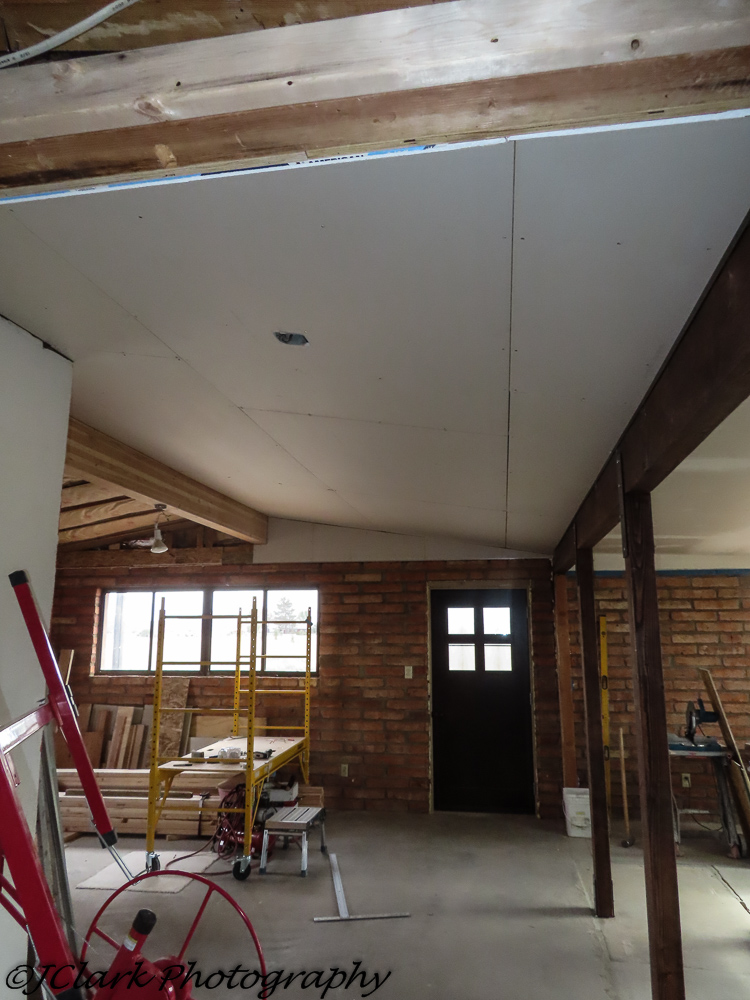 One side of the living room ceiling now has drywall.

Friday morning Louanne and I went to yoga in Elfrida.  And Friday evening the four of us went back to Elfrida to have dinner at a little place which serves good fish on Friday’s.  Today the wind wasn’t as bad but our temps were dang chilly!