Saturday evening Emmi was acting strange and by Sunday morning we knew something was not right.  Sunday she would not eat nor drink. She would not go for a walk and she would not play with her toys–she only slept.  Veterinarian care is non-existent in our area on weekends.  Monday morning early we were headed to Tucson with one sick little dog.

In 2007 our miniature schnauzer Jazz became very ill.  We were in Tucson and saw a veterinarian, the wife of one of our fellow cowboy action shooters.  Deborah could not figure out what was wrong with Jazz as she became more and more ill.  Deborah finally referred us to Veterinary Specialty Center of Tucson.  VSCOT is a 24 hour a day emergency treatment facility.  There are all kinds of specialists and surgeons on staff–it’s an amazing place. The care we received for Jazz was simply outstanding.  While they couldn’t save her life, they treated Jazz with such love and care that we didn’t hesitate to take Emmi to VSCOT. 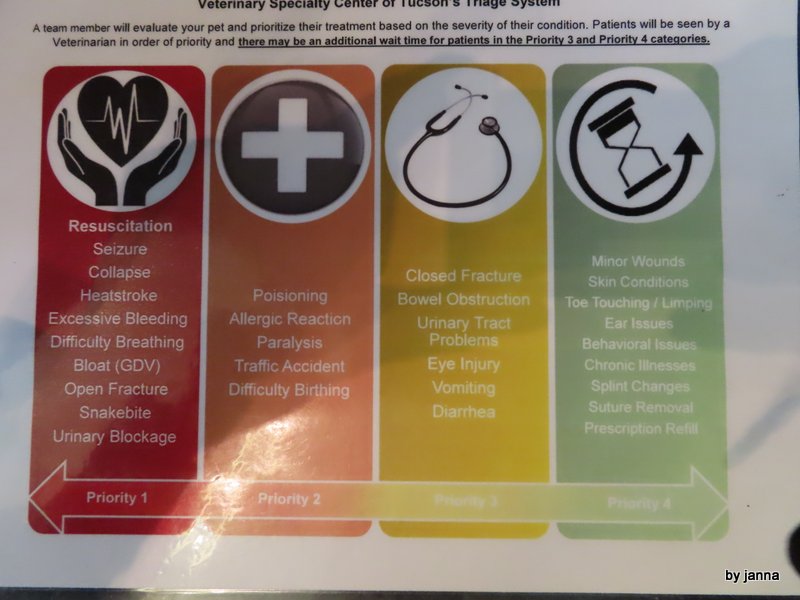 This chart is how VSCOT’s triages the pets who come through their doors.  When we were there with Jazz in 2007 we waited at times for hours.  We walked in Monday morning and there was not another person/pet waiting.  We were probably a Priority 3 or 4 type patient.  If a Priority 1 patient/pet had appeared at their doors, we would have had to wait–and we understand.  Monday we were so lucky–they took Emmi back almost immediately and then we joined her in a treatment room to wait for the veterinarian.  She had a fever in spite of still being on antibiotics for the diarrhea–we saw a vet on Friday, January 4.  After examining her and quizzing us the vet had two recommendations–a complete blood panel and possible ultrasound dependent on the lab work.  The technician brings in a cost estimate, asks for your signature and a deposit.  We left Emmi in their capable hands.

We headed off to Home Depot and Costco.  When we were loading the groceries into the truck at Costco the phone rang.  They were ready to discuss Emmi’s results with us.  Emmi was one sick little dog.  One of her liver enzymes was close to 900 and high normal range is 125.  Her other two liver enzymes were also elevated.  The ultrasound of her liver was abnormal.  They wanted to admit Emmi to give her IV fluids and possibly antibiotics if her fever did not go down.  So with tears in our eyes we left Emmi to spend the night.

On the way home I Googled the antibiotic Emmi had been prescribed for the diarrhea–metronidazole.  Adverse reactions listed on many websites mirrored Emmi’s symptoms, particularly the liver failure.  We called VSCOT and spoke with the veterinarian and he wasn’t in agreement with us.  That’s OK.

Monday night was not a restful night for either of us but Emmi did well.  Tuesday morning the vet called and said her fever was gone, she was perky, eating and drinking.  We could come get her late afternoon. 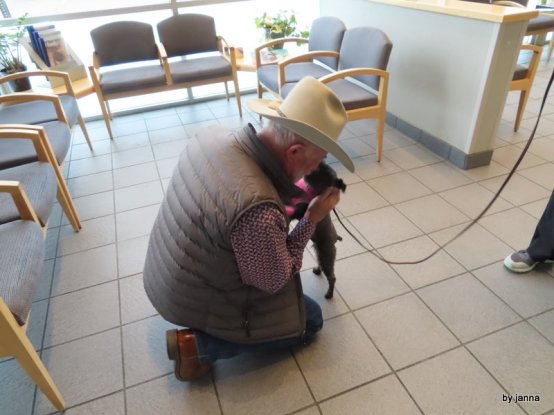 She was so glad to see us as we were Emmi!  The vet’s final diagnosis was hepatitis–infectious or brought on by a toxin.  It could be cancer caused but he ruled that out based on the ultrasound.  The Cowboy and I firmly believe it was brought on by a toxin–the antibiotic.   At home Emmi took a short walk with me, played with her toys, ate and drank.  She slept well–I didn’t, I was up every 2 hours checking on her.  Today we took two long walks, played–she is still not crazy about her dog food–she would rather have the chicken and rice I cooked for her so we are discussing that little issue. 🙂  We dodged a bullet and our sweet little Emmi is on the mend.

We purchased all kinds of meat at Costco yesterday and today I packaged it using a vacuum sealer.  After lunch I helped the Cowboy with some major demolition work in the rooms which will eventually be our outdoor covered patio.  While in Tucson on Monday we made a big purchase–all the new windows for the west side of the house.  It’s so exciting to see it taking shape!

Several people have told us citrus trees do not grow well in this area yet our friends Louanne and Dan have seen a lemon tree loaded with fruit across the golf course from their home.  While I Home Depot we spotted citrus trees and decided to give it a try–one lemon and one lime–we will see what happens. 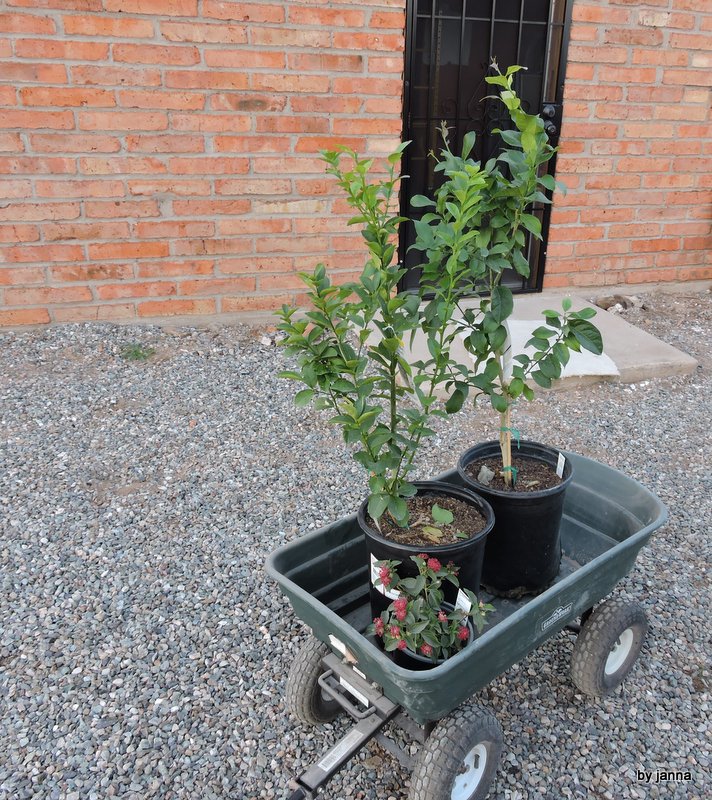 Sunset Wednesday afternoon and snow on the Chiricahua Mountains.