I’m going to say it again, it’s so good to have Larry and Geri here!  Even though the day promised to be miserably hot we were out the door by 9:30am heading to Mill Creek over between Livingston, MT and Yellowstone Park.  A few years back we had tried this same trail with Larry and Geri only to turn back when Larry destroyed a tire on his ATV.  With this year’s record snowfall we weren’t sure we could make it all the way to the summit at almost 10,000 feet but we were going to give it our best shot.

It was a hazy day which we later learned was caused by smoke drifting in from forest fires in California and Colorado–it’s summer in Montana. 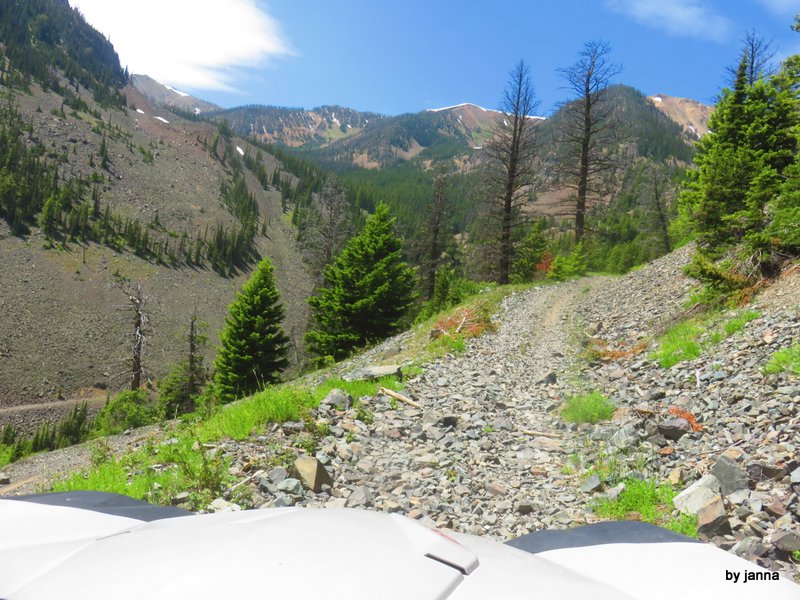 As you can see, this is a very rocky trail–enough to jar your teeth!  As we traveled up in elevation the temps dropped enough to be tolerable.  After lunch we made a visit to what we call Sarah’s Lake.  Our friend Sarah and her family own the mining claim where the lake is located.  It was so green and lush with wildflowers–and a cute little dog. 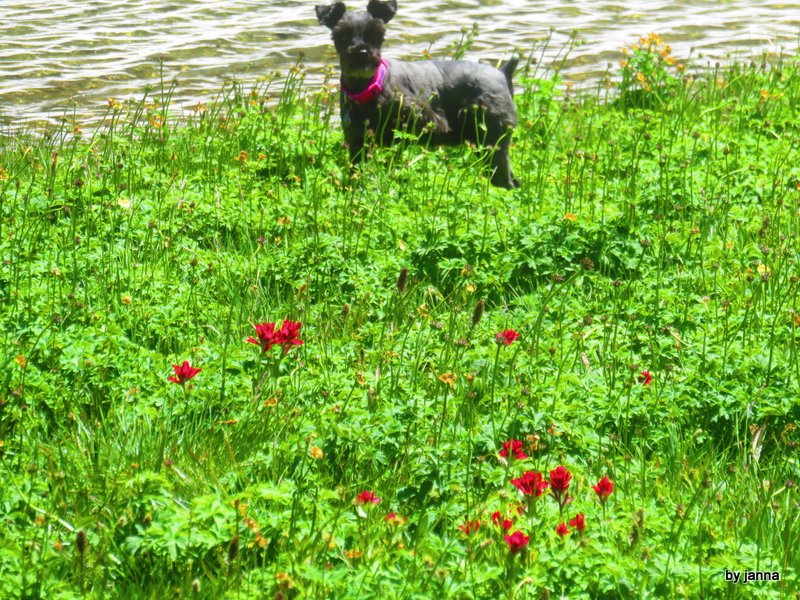 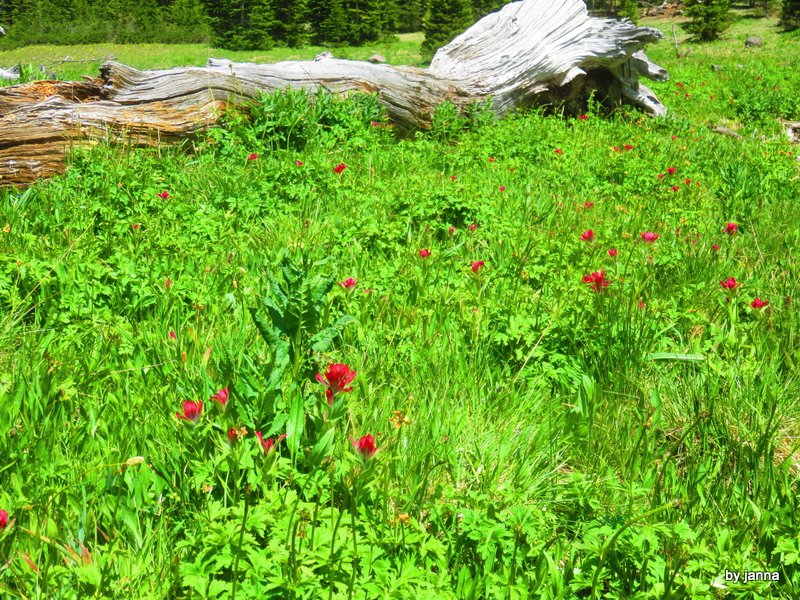 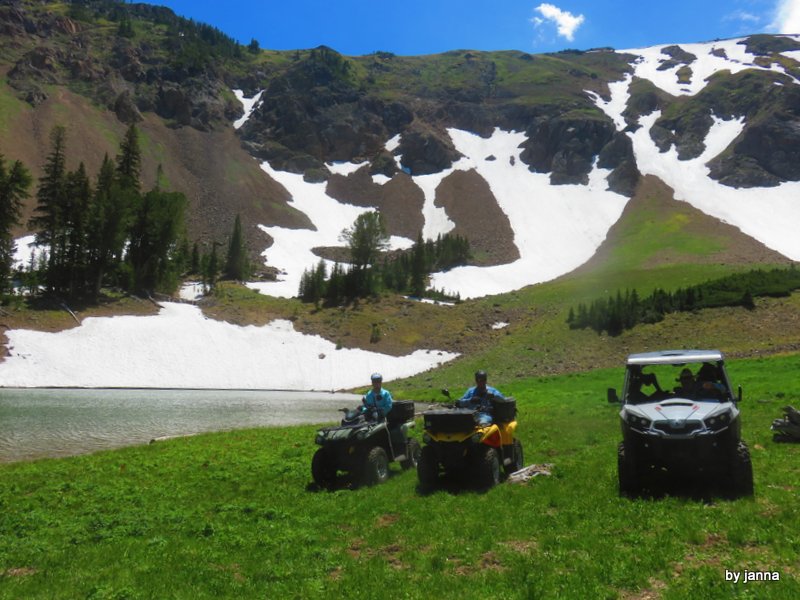 Lots of snow which wasn’t boding well for our reaching the summit. 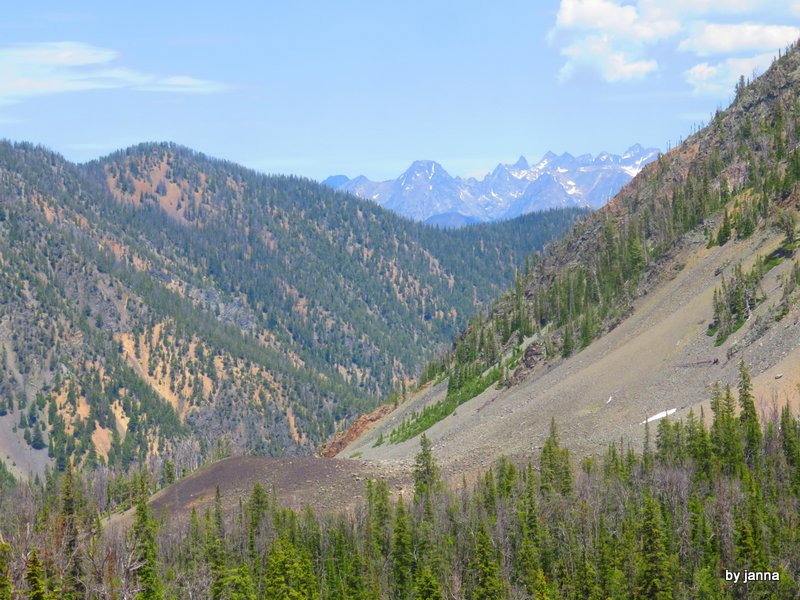 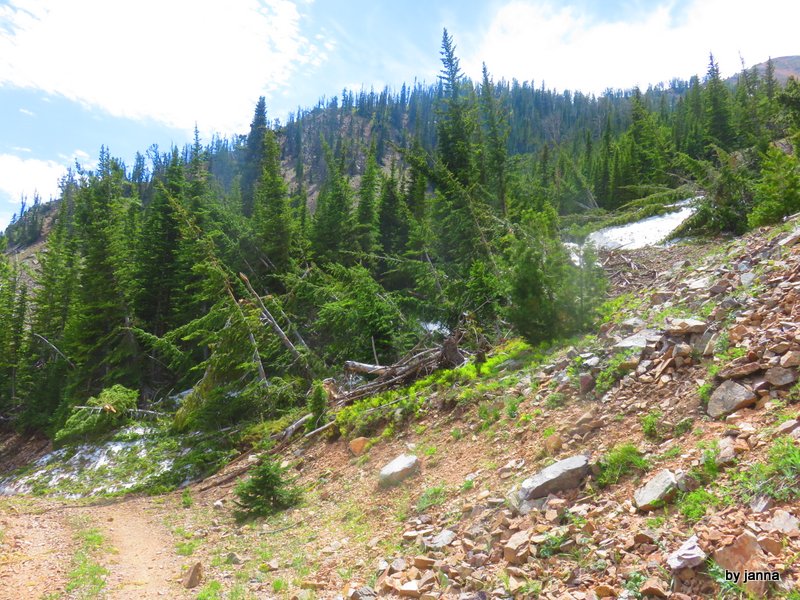 And another sign we might not make the top–an avalanche occurred sometime during the heavy winter snowfall. 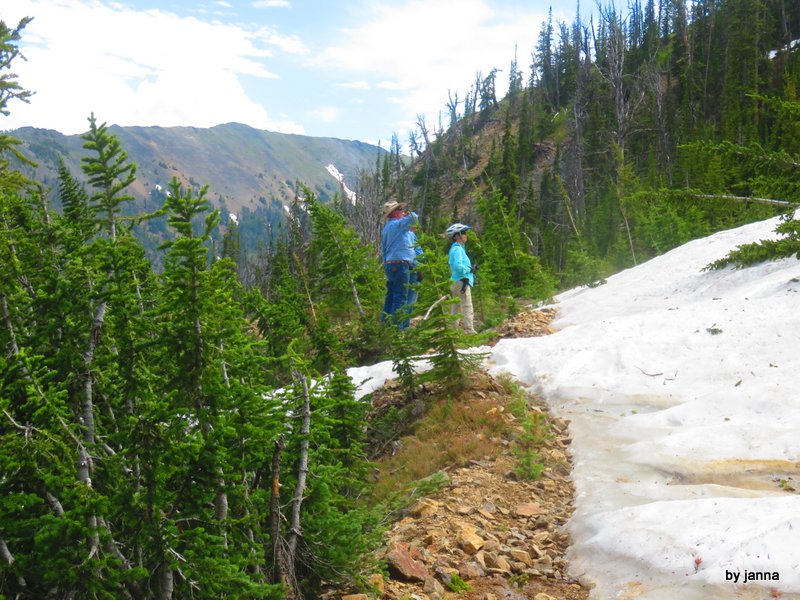 About one mile from the top we came to a stop–dang it–twice now Geri and Larry have ridden portions of this trail but have not seen the outstanding views from the top.  But–there were still breathtaking views to see! 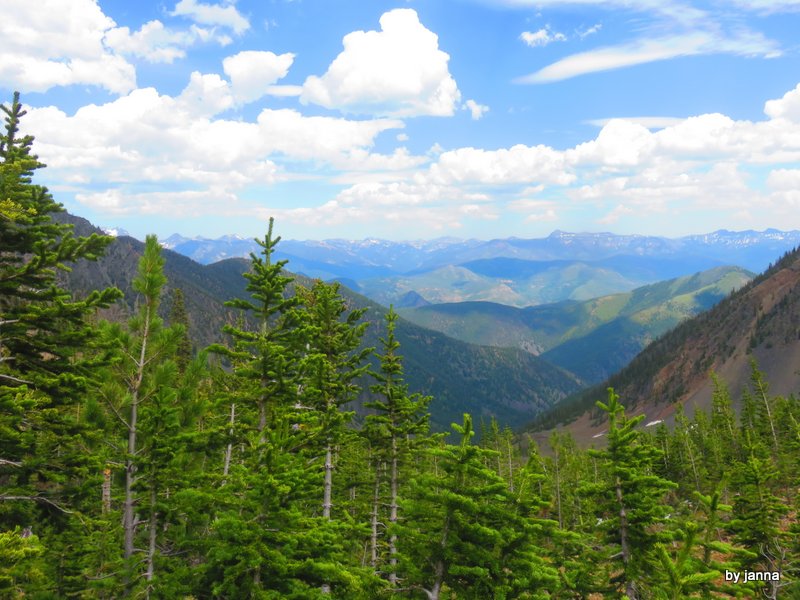 After we crawled back down the mountain the Cowboy tells me he has decided we are going to check out another nearby trail–oh, my!!  It’s a former logging road in excellent shape, smooth with no rocks and breathtaking views around every corner.  It’s a loop road but unfortunately we came to fallen trees blocking the trail and had to turn around–we will go back! 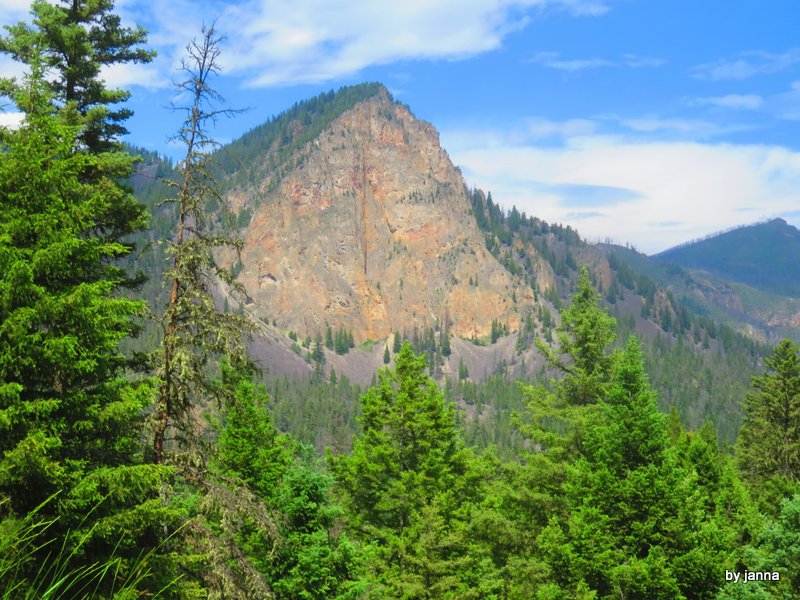 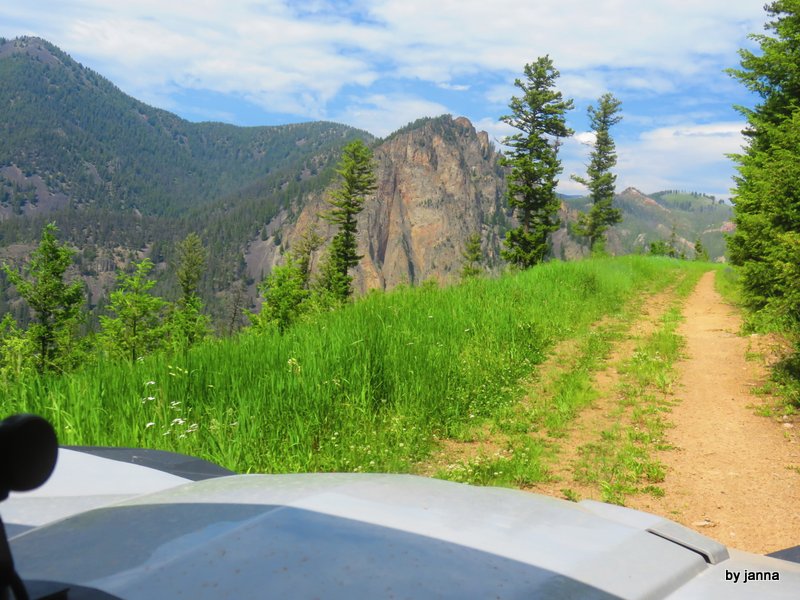 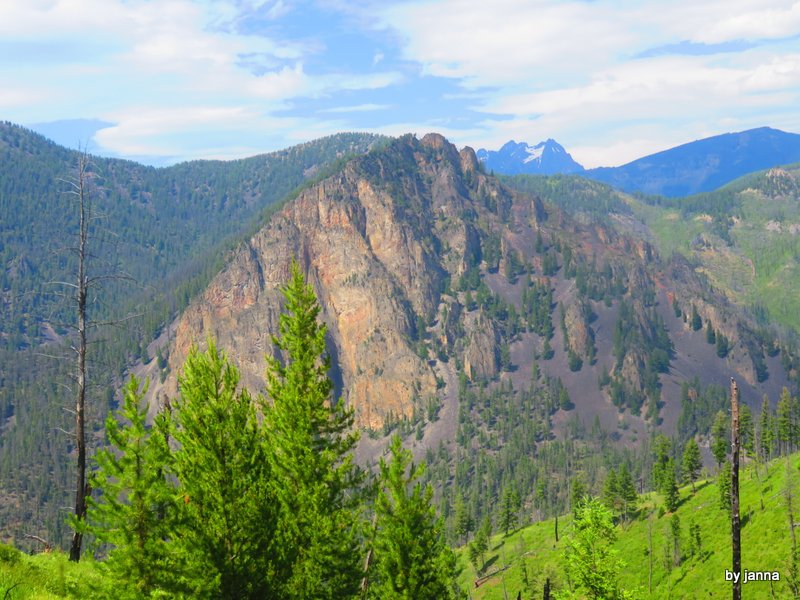 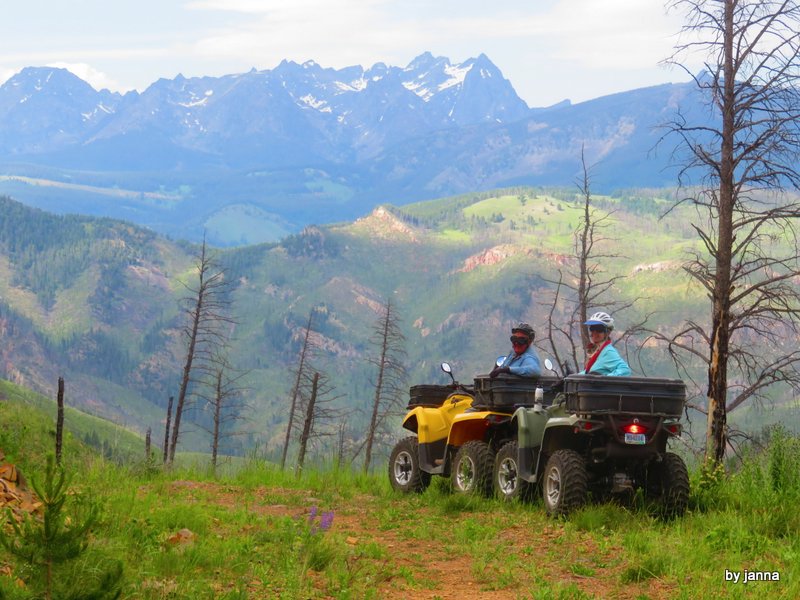 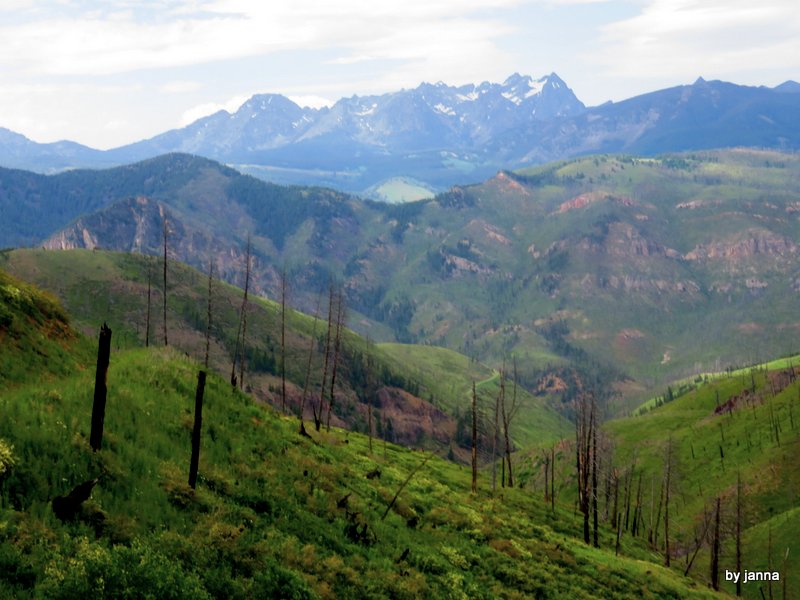 Up until yesterday we had not started our lawn/flower bed sprinklers–we’ve had enough rain and our temps have been perfect.  That all changed on Friday–it was 94 degrees and the wind was blowing–nasty weather!!  Today we’ve reached 87 degrees with not as much wind.  We’ve been packing the RV, doing laundry, cooking and the guys have been solving the problems of the world.

7 thoughts on “The CanAm Is Exercised”

Leave a Reply to Don in Okla. Cancel reply