On Tuesday morning, 10am found us sitting in the Douglas, AZ Auto Zone parking lot awaiting our tour guide, Keoki.  When he arrived in a 1987 Volvo which had seen better days I had reservations.  Those reservations were totally unfounded.  Keoki and his Mexican wife have lived in Agua Prieta for over 30 years raising five children.  He’s a former newspaper writer and has the gift of gab in both English and Spanish. 🙂

The tour started on the American side of the big fence– 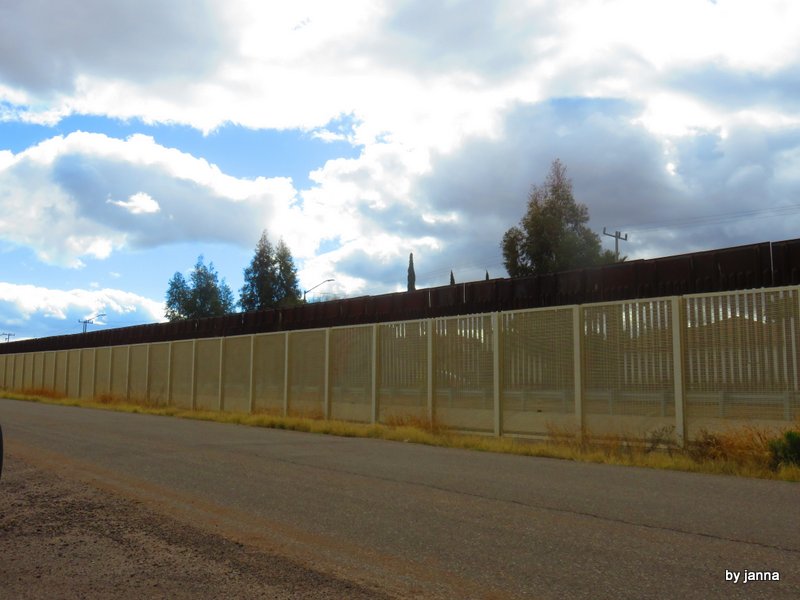 On the US side, the fence is a metal mesh–then there is a concrete ditch and then another fence, twenty feet tall on the Mexican side of the border.  The Mexican people have decided to make the fence a little more visibly pleasing– 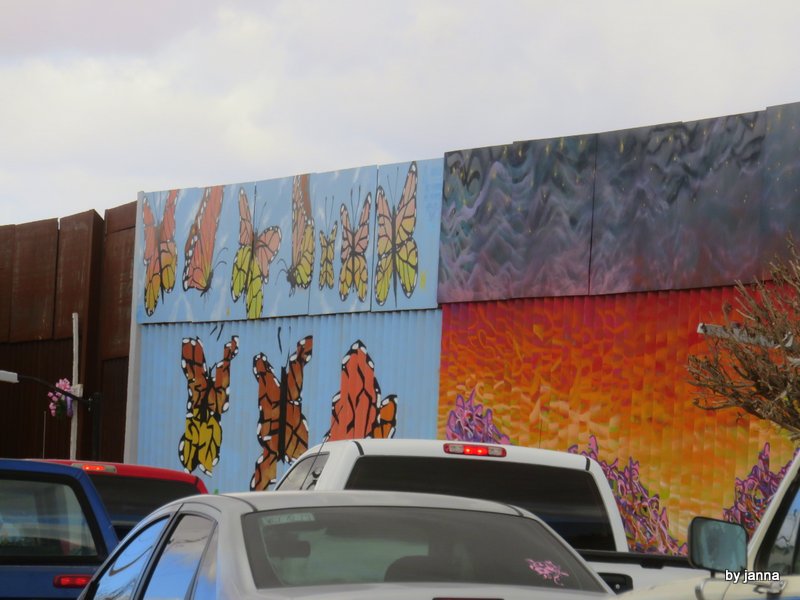 On the US side, Keoki showed us the building where the tunnel built by drug lord El Chapo terminated in the US.  The tunnel was huge–Keoki has a photo of the actual tunnel–and allowed drugs to enter the US and drug money to enter Mexico.  The tunnel was discovered in 1990 and here is an interesting NY Times article  detailing the discovery.

There are several American company factories in Agua Prieta–one a Velcro factory.  Keiko told us his sister-in-law works in one of the factories and makes about $11/day.  To put it in perspective, he said his sister-in-law must work two hours to afford two boxes of corn flakes.  Have you counted your blessings lately???  Keiko asked the man “thrashing” the bear grass if he made as much money as someone working in the factories–“yes, I do and here I am outside, I can smoke a cigarette when I want to, I’m not shut in some factory with rules.”

the bear grass doesn’t look anything like what we call bear grass in Idaho and Montana.  The grass is being harvested in the mountains near Silver City, NM.  It is used to make bear grass brooms and in the making of fiberglass.  This is a low tech operation– 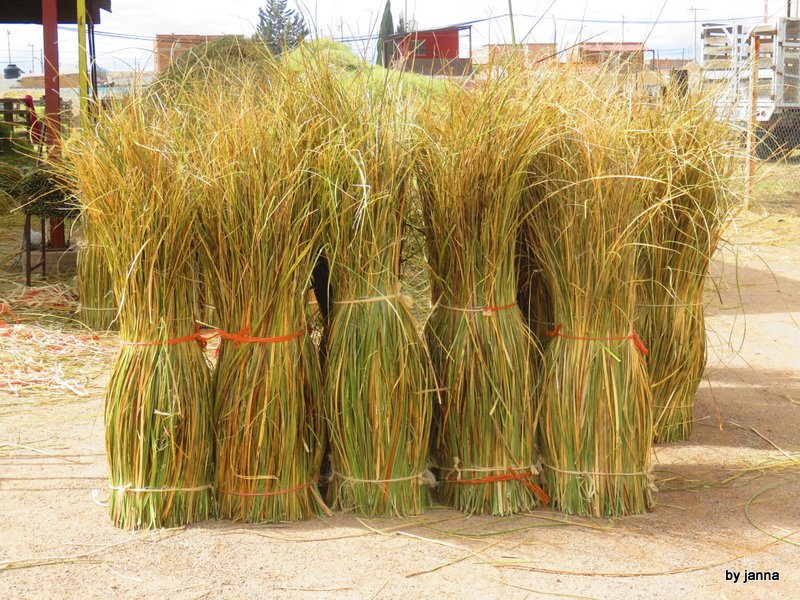 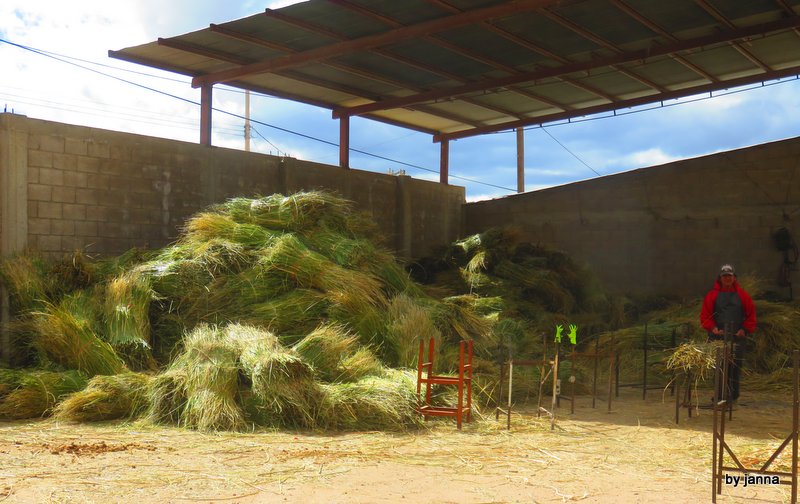 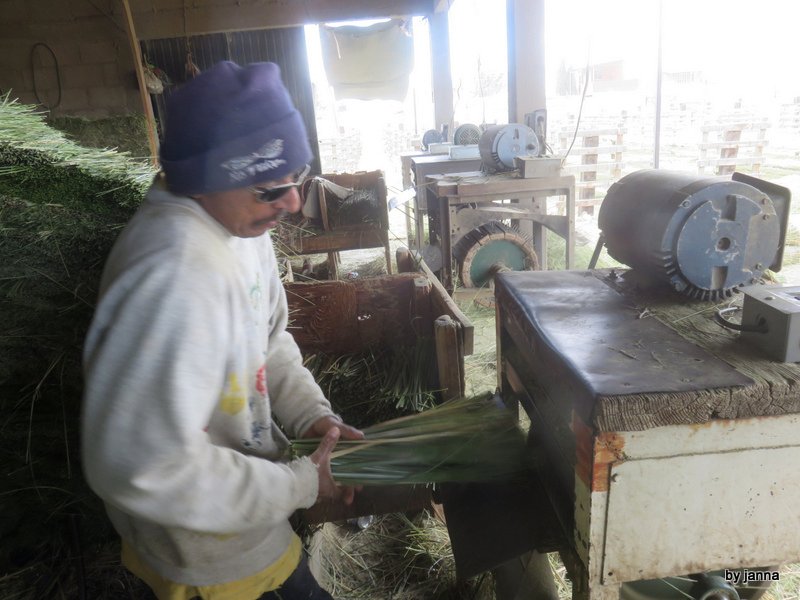 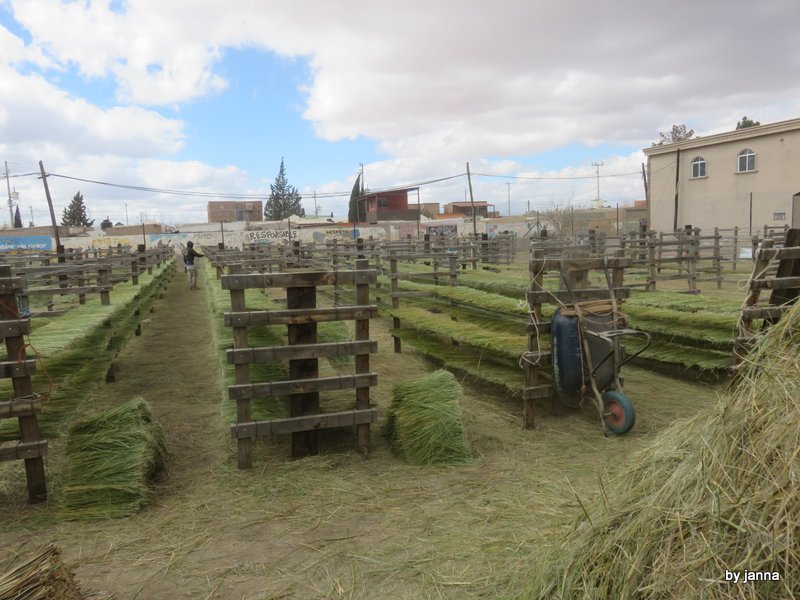 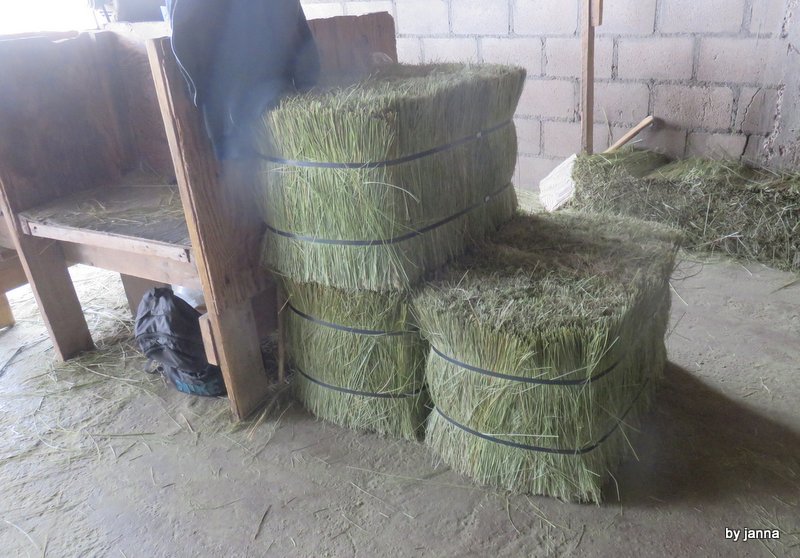 There is a flour mill 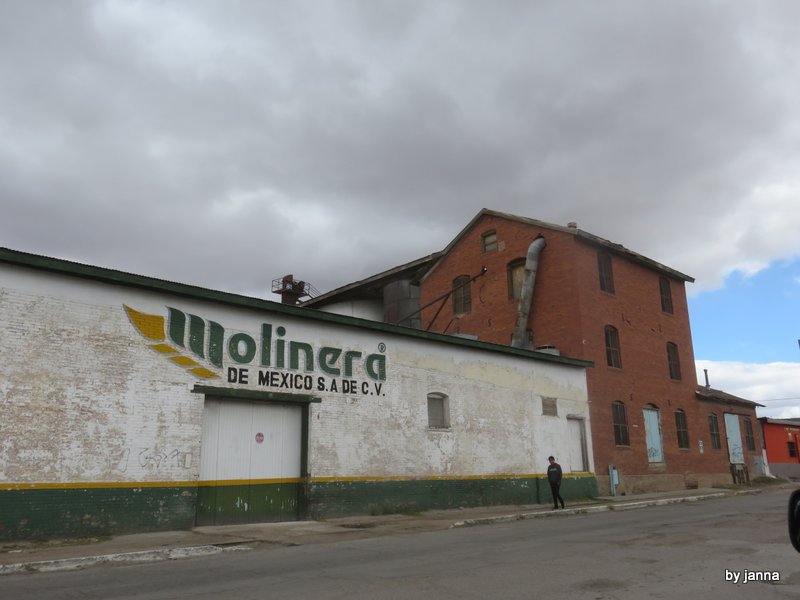 which a group of polygamist Morman people built.  The factory is no longer used to mill flour but is still in use–large quantity bags of flour are broken down into smaller quantities and distributed.

A highlight of the tour was Cafe Justo 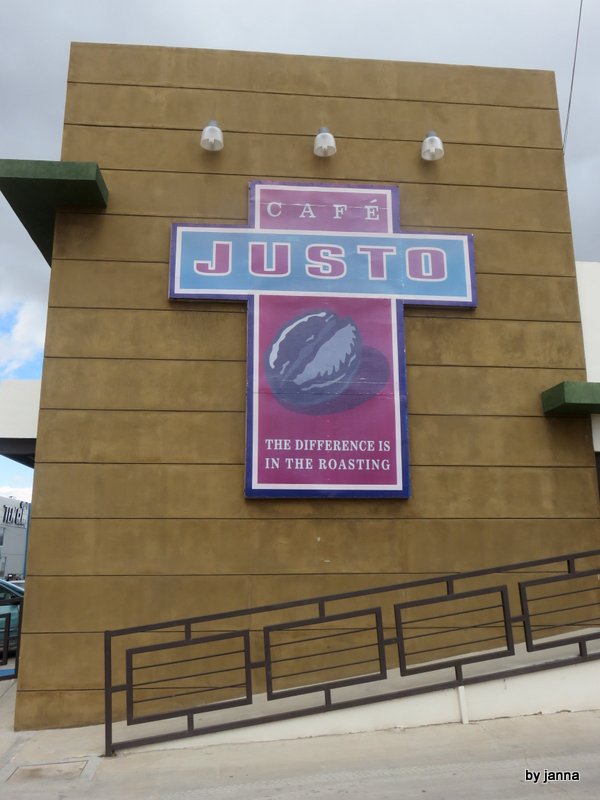 –several years ago the Presbyterian church noticed an influx of people in Agua Prieta from a coffee growing Mexican state.  The coffee bean growers had found it impossible to make a living–they had no resources for distributing their coffee and were unable to support their families–so they abandoned their land and moved to Agua Prieta hoping for a better life.  Many crossed the border into the United States.  The Presbyterian church started a co-op of sorts–the coffee bean producers moved back to their land, the church subsidized the worker wages and provided a means to get the coffee beans to consumers.  The coffee/espresso cafe is part of the co-op and provides additional jobs.  The coffee roasting factory is attached to the cafe.  The smell when we walked in was divine and the coffee absolutely delicious.  I purchased a bag of beans and as many of you know–I’m really, really picky about our coffee–we made coffee this morning using those beans–absolutely delicious!!! 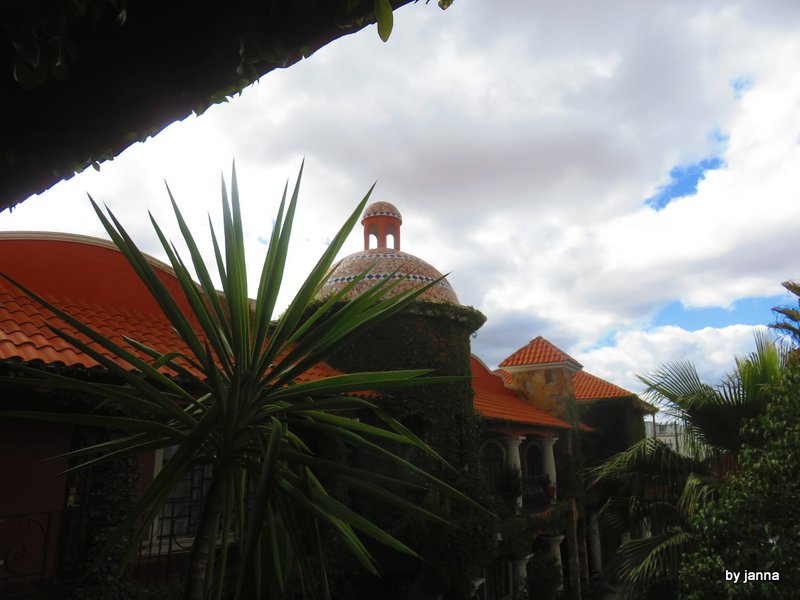 Maria Bonita Hotel–eight rooms, built from the ground up by the owners–we were allowed to see some of the rooms–stunning!!  There is also a restaurant in the hotel. 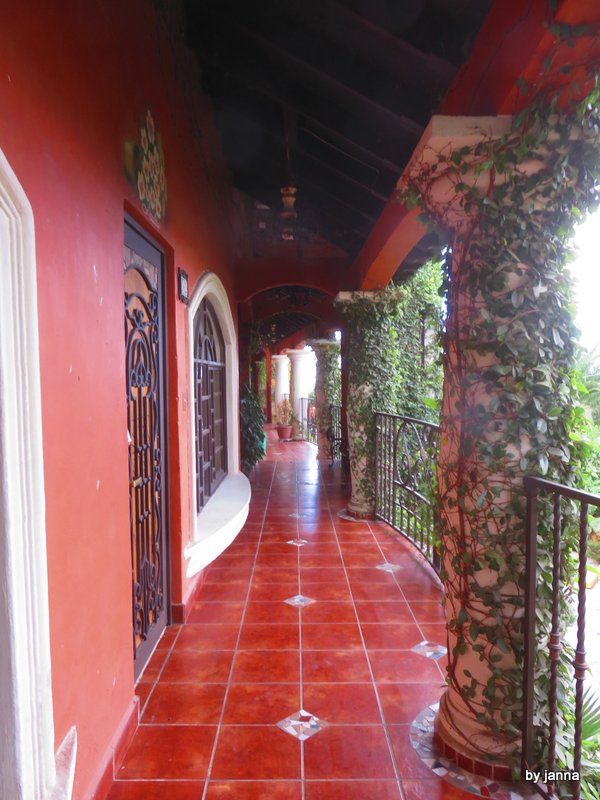 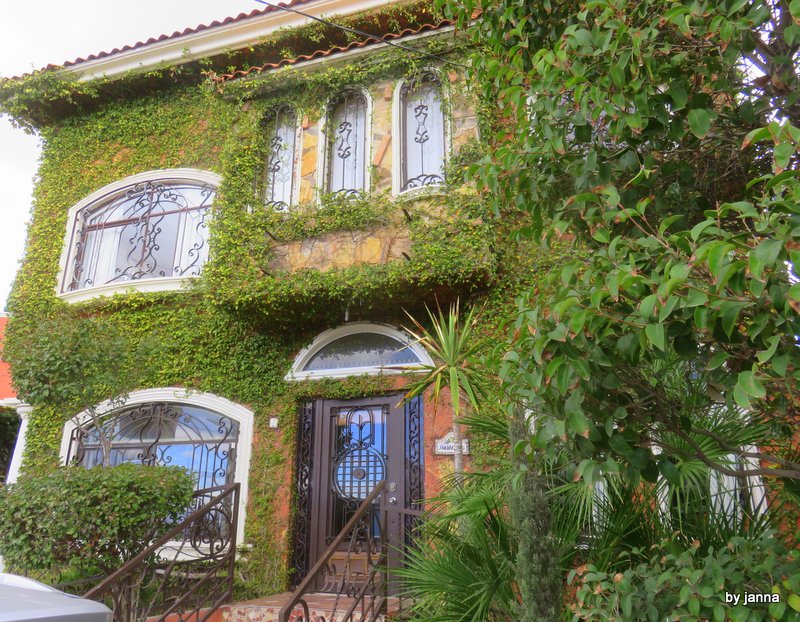 Lunch was delicious–we ate in a very busy seafood restaurant–the two guys had shrimp dishes, I had fish tacos.  The three meals cost $30 which included the tip! 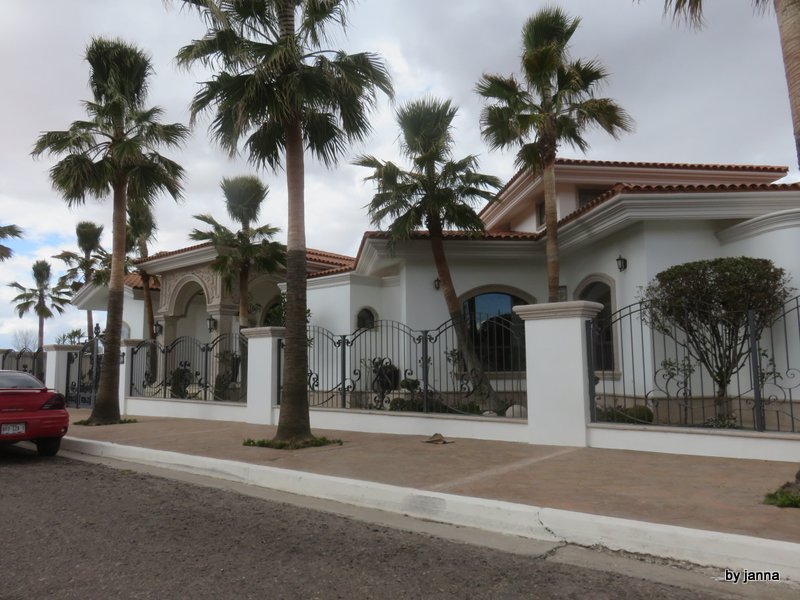 Wonder what the owner of this house does for a living?????–I bet I can guess! 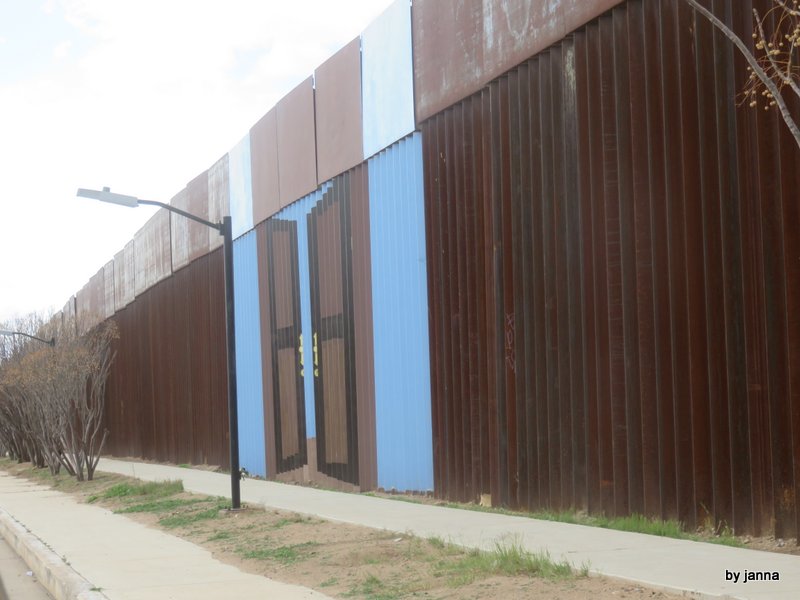 The fence is comprised of vertical steel beams with a space between each beam–you can see into the US between each steel beam.  This “door” is not visible driving directly toward the fence.  But, viewed from the side, the “door” is clearly visible–cool.

Keiko and his Spanish helped us purchase medications in a pharmacy and it was time to head back across the border.  He has a special border crossing pass and is allowed to bring people into Mexico in his car but cannot take people into the US in his car.  So, he dropped us right outside the border entry building and we were soon back on American soil.  We had a great time and enjoyed every minute of the tour–well worth doing!