Their right retired mind that is would want one of these things???–a concrete mixer!  We live about 30 miles from the nearest ready mix plant and they charge big bucks for mileage.  So my frugal Cowboy–bless his heart–wanted a cement mixer for smaller jobs such as the footings needed for the walls joining the two house together.  Why anyone built two houses within 3 feet of each other is a good question–it caused all sorts of drainage/roof problems.  There is also a wind tunnel effect in that 3 feet corridor between the two houses.  So, we are joining the structures making it one house–with guest quarters/mother-in-law suite, etc.

I found the cement mixer on a buy/sell Facebook group–it was located in Willcox so off we went this morning.  The location was so far out in the country the lady in my phone couldn’t find us to lead the way–we were looking for a needle in a haystack but finally found it–nice people!

While in Willcox we tried another Mexican food restaurant–Isabella’s–and it was very good–no margarita today Jodee! 🙂 While in the restaurant we watched another couple enter, sit down, jump up and get their own menus, then twiddle their fingers on the table until the waitress appeared to take their drink orders.  There was only one waitress and several tables with diners.  Our drinks/food were prompt as was the order delivery to the surrounding tables–the waitress had obviously done this before!  The couple gobbled their food then demanded their check before the last bite was taken.  UGH–those two people were NOT raised in the south where I was–no manners!

I’ve been wanting a bird bath–we hesitate to feed the birds and draw in other critters such as rats and mice–but I thought a bird bath might entice some visiting birds.  Ace Hardware in Willcox had just what I wanted–

I’ve started a little “mound” area for shrubs and flowers–I’ve planted a rosemary bush and some sort of tall grass plus our little Christmas tree is also out there.

The watering system for the trees on the west side of the house is now working–the timer which runs the drip lines is fairly simple to understand–some aren’t–we have one of each in Montana! 🙂 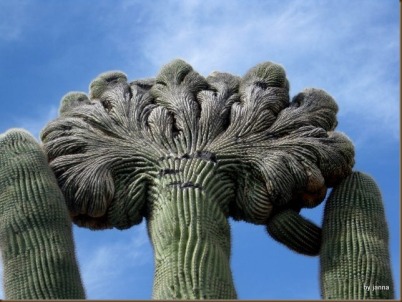 Kathy and Sandy examining the remains–disease, weight, wind–who knows but it was sad to see this photo!

We watched the Super Bowl last night–aren’t you proud of us Jim Meachum–and enjoyed it.  The game came in clear as a bell on CBS using our Amazon antenna.  The words “Amazon antenna” if clicked will take you to the antenna on the Amazon website.  I need to change the color of my hyperlinks so the words show up more clearly as a link but it requires my inserting HTML code into a section of the blog–YIKES!!–I haven’t summoned the courage yet!

And just a little trivia–did you know Tim Hauck, a safeties coach for the Philadelphia Eagles is from Big Timber, Montana??  His brother, Bobby Hauck, is the new head coach for the University of Montana.

14 thoughts on “Who In Their Right Mind”