A few clouds and a little dust leave us with some awesome sunsets over the Dragoons–this was Monday afternoon.

As I’ve said before this guest house is an odd little building–about 1000 square feet.  This house was sloppily attached to the main house causing structural problems for both houses.  There is an electric meter on the outside of the main house and another electrical meter in the laundry room of all places!  We’ve often thought it would be nice to know the “why” of these two houses.  At church on Sunday we met a woman who knew the occupants of these houses.  Seems this guest house was being built for or by a niece–that explains the extra electric meter.  Nancy said the woman came to visit her one day, said they were leaving and left–never to return.  It still doesn’t explain how this property ended up in the hands of a REO company nor does it explain the oddity of the guest house rooms.

Just off one end of the living/dining area is a small room–it had one tiny window and a spot where there was a window but it had been removed and the opening boarded over–the floor in this little room is also stepped down.  We intend to use that little room as another guest room–so the Cowboy inserted a window in the space where the board was located. 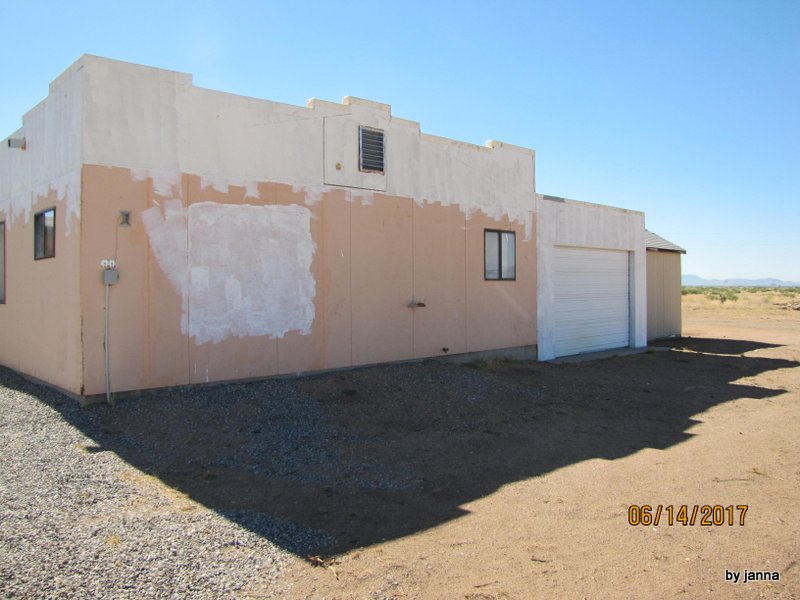 See the little tiny window on the left of the above photo–the white patch on the wall is where the window space was boarded over.  Yesterday the Cowboy inserted this window–notice the narrow door and step–that door leads to the larger bedroom?????  The door is coming out and we are using drywall to cover the opening.

Today I scraped ceilings again–I did the bathroom and hallway yesterday, the kitchen today.  All the ceilings are scraped with the exception of the laundry room and we aren’t ready to do anything in that room–yet.

Now for the “one thing leads to another” title.  We had originally intended to leave intact the wallpaper in the main bedroom–it was in good shape, ugly but not too bad.  Well–we wanted another window in that room which entailed removing drywall and building a new window frame.  So, last night, out came the steamer and the wallpaper started to disappear–“one idea leads to more work is more like it!”

Old window replaced with a new one and another window installed–the Cowboy worked hard today!!

The outside of the house with three new windows.  All that white stuff is rubberized roof coating which we applied before heading to Montana in May–we thought it might protect the raw, new wood from the sun and it seems to have worked.  We are going to have someone come and stucco the entire outside of the house and garage–soon.

Not the greatest photo, it was almost dark and this great horned was sitting at some distance–he was gorgeous!!

8 thoughts on “One Thing Leads To Another”