When all the eclipse hype started my friend Jill and I talked about going to their home in Driggs, ID–right in the path of totality.  The Cowboy had read more of the media hype than I had and was not keen on the idea.  My friend Kelly and her family had long ago purchased plane tickets to come to Jackson, WY for viewing–her son-in-law has a home there.  When Kelly told me hotel rooms in Jackson, WY had been sold out for months I started thinking–do I want to view the eclipse with millions of people, stay home and view or go somewhere really remote.  The Cowboy brought up the idea of going to Blue Lake–a remote gorgeous spot with extremely hard access on the edge of the wilderness.  Here’s a photo of one of our previous trips to Blue Lake with the ATV–

And another taken in August, 2016 on an ATV trip with Larry and Geri plus Elmer and Henrietta.

So instead of this: 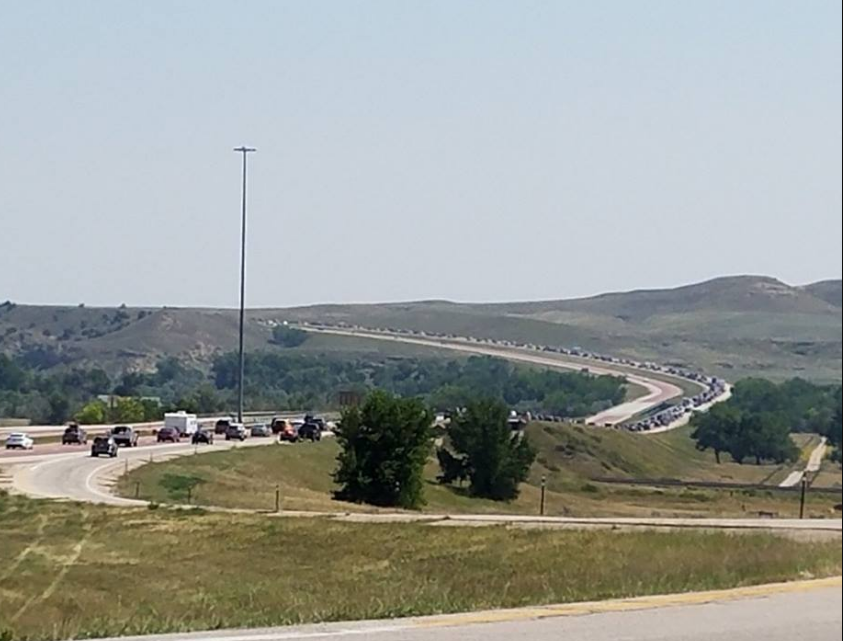 We loaded the truck camper Sunday afternoon and headed up the Boulder finding a perfect boondocking spot by the Boulder River.  Before 8am Monday morning we were in the CanAm–wearing our coats I might add–and headed even farther up the Boulder.  We reached our prime viewing spot about 9:30am–we stopped short of the actual lake thinking the smoke might be less up on the hillside.  Our view stretched almost to Yellowstone Park with views of Pilot and Index Peaks.  No one–nobody around.  Total peace and quiet.

I took over 200 photos–many I tossed but some I thought were actually pretty dang good.  I used the Nikon D5000 some but the best of my photos came from my Nikon Coolpix P600 with its 60x optical zoom.  The red color in some of the photos could be a result of the forest fire smoke which is still hanging around.  Sooooo–here they are–

This photo was probably snapped about the time of our “totality”–11:36am, not bad!

I am very pleased with the way my first eclipse photography session transpired!  It was eerie, exciting and just plain amazing!! After the eclipse we drove over the hill to Blue Lake–gorgeous as always!  Notice the Cowboy is still wearing his coat–when the moon covered the sun, the temp dropped and the dang mosquitoes appeared–guess they thought it was dusk!  I thought it would be darker than it was–when this photo was taken there was still a smidgen of the eclipse left.

Eclipse is over, back down the mountain–we had planned to stay another night but the mattress I purchased for the truck camper was awful–we might as well have been sleeping on concrete.  We both had minimal sleep Sunday night and couldn’t face another night of that mattress and headed home to our comfortable bed.  More on the mattress later.

20 thoughts on “The Eclipse”