One evening last week the phone rang–it was Ken, our friend/neighbor calling to see if we wanted to accompany them and friends to the wild horse range on Saturday.  They’ve asked us a couple other times and it just hadn’t worked out–this time we had a new machine and no plans–we were on!

When the Cowboy and I met, I was living in Powell, WY and the Pryor Mountains were visible to the east.  An ugly, barren pile of rocks which only became beautiful when the setting sun would reflect turning the hills a beautiful pink color.  So, my expectations for the ride were–ugly, barren piles of rock and dust, lots of dust.  Was I ever wrong!  I never dreamed we would see color as in the photo above, I never knew the Pryor’s reached such high elevations–we were at about 8600 feet at one time yesterday and I certainly didn’t think parts of the trail would be forested!

In 1968 an effort by a group of citizens resulted in the establishment of the Pryor Mountain National Wild Horse Range.  These horses have roamed the Pryor Mountains for more than a century and blood typing has indicated the horses are closely related to the old type European Spanish horse. Their unusual coloring points to their Spanish lineage too–dorsal stripes down their back, wither stripes and zebra stripes on their legs.  So–where did these horses come from–unclear but it is a common belief the horses escaped from Native American herds finding a home in the Pryor Mountains.

The BLM manages this herd and tries to keep the numbers between 120 to 160 horses.  Genetic diversity of these horses is high and thus the current level of inbreeding is low.  Natural and man made barriers confine the horses to their current range so the yearly foal population of 20-30 per year is the only source for new horses.  Every two to three years the BLM gathers and removes animals in order to maintain the desired number.  One of the ways horses are removed is through adoption by the general public through application.  (This information was obtained via a BLM pamphlet dated April 2000)

This time of year the horses are found at higher elevations in the open meadows.  Leslie and Bev were in charge of counting and we saw over 120 head of horses throughout the day.  Horses are not the only wildlife you can see on this land–we stopped for lunch and one of our group–Peggy–noticed a bighorn sheep poking her head around a nearby knoll.  The sheep’s baby soon joined her and we watched the pair and they watched us as we enjoyed our lunch–amazing!! 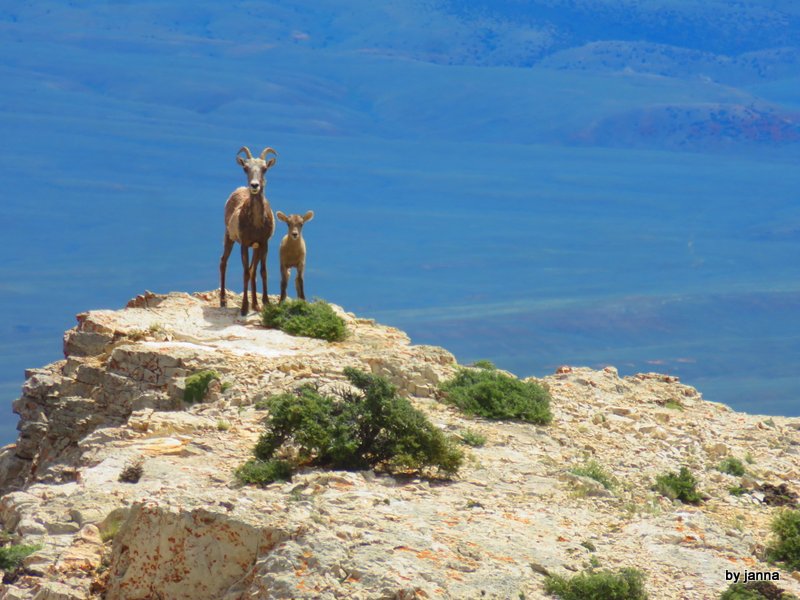 The bighorn sheep have an interesting story too–these sheep are originally from a small herd which had been reintroduced into Wyoming’s northern Bighorn Mountains.  In the mid-1970’s they migrated across the ice of Bighorn Lake and remained on the west side of the Bighorn Canyon where their population has increased.  These sheep have persisted where several deliberate attempts at reintroduction have failed.  (From the BLM pamphlet)

The day started out warm and sunny with fluffy white clouds in a blue, blue sky changing to threatening clouds and much cooler temps as we climbed in elevation–it never rained but looked as if the skies could open at any time! 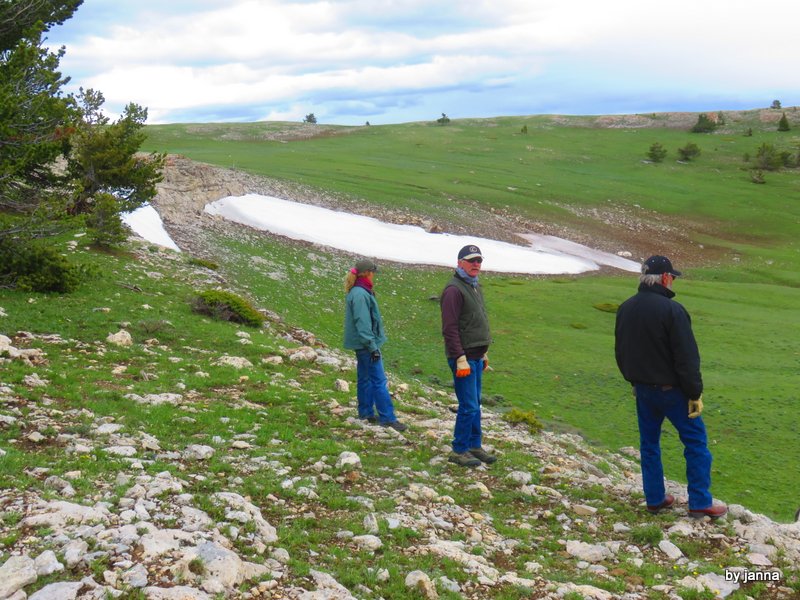 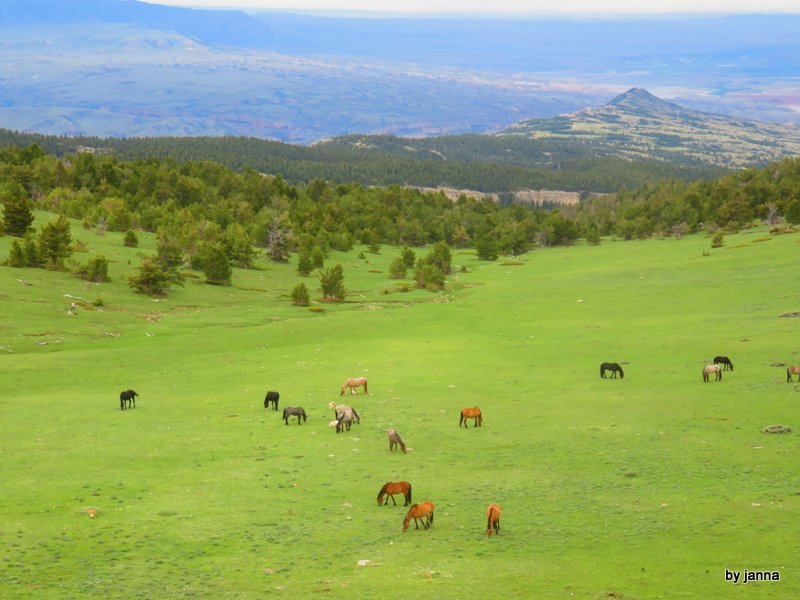 The wildflowers were stunning–we even spotted a bitter root–the Montana state flower.

Ken called Friday evening to tell us we would be going in the ice cave–we needed flash lights and knee pads–HUH???  Seems there are two ice caves located on the wild horse range–we visited Little Ice Cave but decided against crawling inside.  Ken and Leslie as well as others in the group had been inside on past visits–seems you crawl about 50 feet before the cave opens up into a large room with stalagmites, stalactites and soda straws.  Something to look forward to for the next visit!

The entrance to Little Ice Cave–come on down Tom Hengel–we will let you lead the way! :)))))

Another dog, Lacy, joined us much to little Emmi’s dismay.  Lacy is a puppy and wanted to play–the queen bee was having none of that! 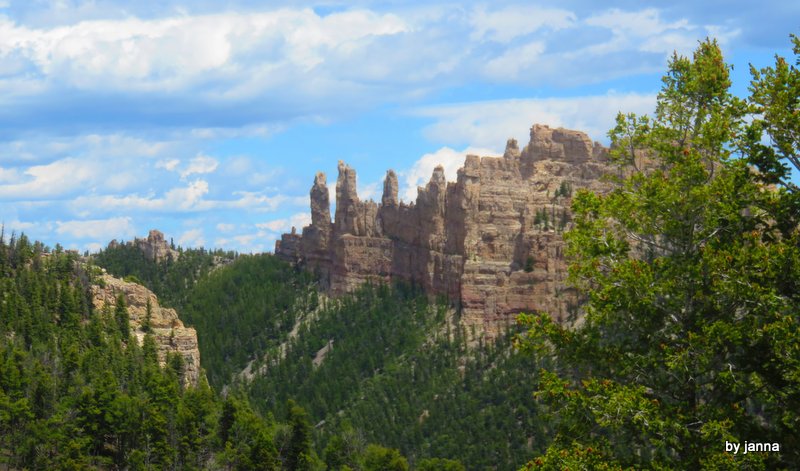 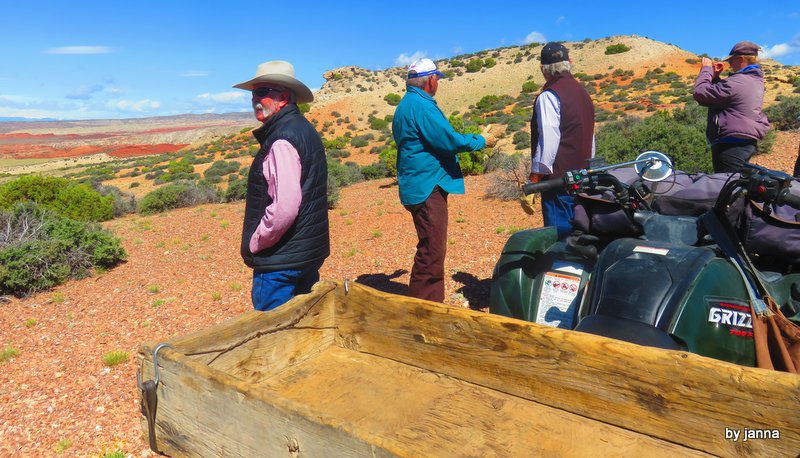 This has to be one of our all time favorite rides and we can’t wait to do it again!  If you would like to read more about the wild horse range here is a link with tons of great information.  The below photo was my lucky break–I was watching other horses at the time, heard the screaming/chattering and swung the camera toward the noise–

Arizona fire update–our area was under a pre-evacuation order but that order has now been removed.  We’ve been in contact with Brian–our friend and well driller.  He’s keeping watch and keeping us informed.

Taken from the Benson side of the Dragoon Mountains–we are on the eastern side of these mountains. (Photo sent to us by our friend Linda)